If you're a witness, a defendant or a junior attorney in a law firm and the lawyer you are working with is a combative bully, how should you handle the situation? 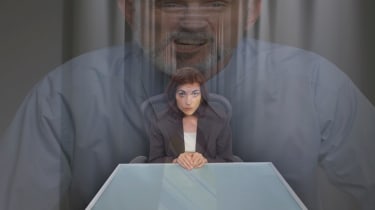 We hear a lot about bullying: at school, and cyber-bullying over the internet.

But bullying — any use of force, coercion or threat that is intended to intimidate — isn’t just confined to the playground. The adult world has its share of bullies, too. “Especially lawyers, who can be very good at being very bad,” according to the nation’s leading expert on bullying in the legal profession, Philadelphia attorney Fran Griesing.

In a moment I’ll tell you about “Jamie,” a reader who had a ringside seat to the antics of a lawyer with a Ph.D. in bullying, but first, this question:

“Is bullying by lawyers something new, or has it always been that way, and if not, then what’s the reason for so much more bullying today?”

Perry Mason, We Need You!

“There has always been a certain amount of lawyer bullying — it goes with the territory — but there is much more today than in the past. Our courts frequently comment on the breakdown of civility in the legal profession, citing the way media portrays lawyers — especially trial lawyers — as sleazy and aggressive, giving the impression that is how we are expected to act,” Griesing points out.

“Just compare today’s open hostility to each other and clients to Perry Mason, who was a gentleman. Lawyers in the ’40s ’50s and ’60s were far more civil, far more respectful of each other than we see today. So, when your image of a lawyer comes from TV or the movies and then you attend law school, no one should be surprised at the uptick in aggressive behavior,” she maintains.

There has also been a decline in mentoring by senior attorneys, something that Griesing has noticed since becoming a lawyer in 1982.

“Then a lot of time was spent working with more senior lawyers who gave feedback and who I got to observe. A lawyer’s first job was an apprenticeship. You worked 12 hours a day, six days a week and you learned how to practice law.

“Understandably, clients today are extremely fee conscious. Business has become very bottom-line oriented, and there is less time — or money — for junior lawyers to follow senior attorneys around and learn how to practice law.

“Just tune in to any television or radio talk show and instead of people listening to each other and calmly addressing the issues, voices are raised, and it becomes, ‘Who can talk the loudest?’

“We see the same thing in court, on the job — inside of law firms — and during depositions, where yelling replaces civility.”

Research the Lawyer – What Do Others Say?

When it comes to reducing the chances of bumping heads with a bully lawyer — especially a bully employer for your first job as an attorney — the internet is your best friend.

“Either when looking to hire an attorney, going to work for a law firm, or testifying in court or at a deposition, your best chances of avoiding a bully, or of expecting one and being prepared to respond, is to do your homework. Research the lawyer. What do others say? Have they been disciplined by their State Bar Association for a violation of the Rules of Professional Conduct?

Our reader discovered lawyer bullying as a witness to an auto accident, while having her deposition taken.

“Along with several witnesses, I saw the defendant’s car run the red. But the lawyer for the driver’s insurance company kept on asking the same questions over and over again in a hostile tone of voice, even yelling, making me so upset to the point of tears. He treated all the adverse witnesses that way. And, Mr. Beaver, the attorney representing the innocent driver just sat there, saying nothing! She had that ‘deer in the headlights’ look.

“I learned that she has just graduated law school and was sent to handle the deposition. I felt like standing up and saying on the record, ‘Why is Miss Jones just sitting there, saying nothing when counsel is so aggressive and hostile to me, and I am just a witness?’”

What Can You Do?

If you are in court on the witness stand and opposing counsel is asking you the same question over and over again, and your lawyer is just sitting there, saying nothing, Griesing recommends that you say, “Excuse me, Your Honor, I have answered that question three times and am feeling harassed.”

Griesing concluded our discussion with these comments:

“Bullying in the law is now getting attention. It impacts clients, lawyers at their offices, and professional relations among adversaries. The proliferation of scathing and unacceptable emails is alarming, but more and more courts and disciplinary boards are imposing sanctions and discipline as a consequence of lawyers acting badly.”