The Power Company Fried My Appliances: What Are My Rights?

If a utility company causes a power surge that kills your old (but perfectly functional) appliances, you may not like the answer to this question. The words "actual cash value" could be a costly problem for you. 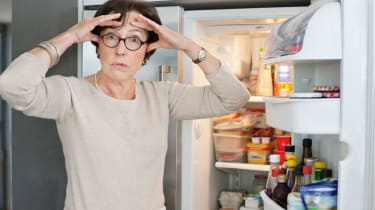 Who is responsible, and what should you do, when a repair crew from your local power utility negligently causes a power surge and all of your appliances — everything that has wires and plugs into the wall — are fried?

That was the question from 82-year-old Thelma, who resides in a small California desert community that is serviced by a small electricity utility. Her email began, “Where we live there isn’t a lot of excitement, but several of us who live in a small cul-de-sac were treated to a show that, at first, reminded me of the hysterically funny Jackass series of movies.”

Anyone who likes those insane films is A-OK in my book.

Thelma was in her front yard watching a crew replace a power pole and related equipment when, “Suddenly, their rig jerked forward and the supervisor began screaming, ‘You idiot! Stop! Stop!’ but the driver kept on slowly moving and then, there was this huge, bright flash. At that same time, I heard the strangest sounds come from inside my house, and when I came back in, there was a burnt smell in the air.”

All of her appliances, television, clock-radios — everything electrical was nuked, even though, “I had surge protectors throughout the house.”

‘We’ll Take Care of You’

Within an hour a representative of the power company was at her door, promising to take care of the damage. He gave her a complaint form to fill out, which she did that very day, sent it in, and then, if you know the saying, “I’m from the government and am here to help you,” that’s where she found herself.

“So, then I contacted my homeowners insurance company and was informed by my agent that I would be fully compensated at replacement cost value but that my rates would be doubled, so not to use the insurance! I’ve been insured with them for over 20 years, never had a claim and it would seem so unfair to use the insurance and then get penalized!

“And then I found your articles and called you. What should I do?”

Liability of the Utility for Negligence – ACV

In most states, when negligence of the utility’s employees causes damage, compensation is required. For example, Southern California Edison's claims policy (summarized) states: “Generally, we are responsible for losses that occur due to our negligence and not causes beyond our control.”

Across the country, most utilities address how a claim will be evaluated with language similar to that of SCE, and it’s the law. You are only entitled to the value the item had right before the damage occurred. If, for example, I cause an accident that totals your 15-year-old pickup truck, its value an instant before the crash — as an old, used vehicle with minimal resale value — is what the law requires me to pay.

“If Edison accepts responsibility for damage to a customer's personal property, it will compensate the customer for the least cost of the following: repair, fair market value or replacement. For items that are not new and cannot be repaired, fair market value is determined by the estimated value the item would have just prior to the damage occurring.”

ACV — actual cash value — can mean a value of virtually nothing when you have a house filled with old, but perfectly good, functioning appliances, which is Thelma’s situation. But her homeowners insurance includes replacement cost coverage, and this means that, practically speaking, she has no real choice but to have her own insurance handle the claim, less her $1,000 deductible.

Her insurance company will turn around and seek reimbursement from the electric utility, including recovery of her deductible. This is similar to being in an auto accident that is not your fault and your auto insurance handles repairs to your vehicle. They will seek subrogation (recovery of what they paid for the claim) from the other party or its insurance carrier, including your deductible so that you come out with no loss.

Before Filing a Claim, Understand the Possible Consequences

Over the years my office has helped clients evaluate whether a claim should be filed with their homeowners or business insurance. More often than not, I found that clients had a poor understanding of what this type of insurance is meant to cover and when not to file the claim.

Recently I spoke with Janet Ruiz, Director of Strategic Communication with the Insurance Information Institute, and we discussed two commonly misunderstood aspects of homeowners insurance: what’s covered and the possible consequences of filing claims in general.

“Homeowners insurance is not a home maintenance policy,” she points out. “It is meant to cover a sudden loss—such as a burst pipe—but not the consequences of a failure by the homeowner to keep their plumbing in good working order and repair any slow leaks that cause mold or other damage. A homeowner’s negligence that leads to damage or injury can lead to coverage being denied and potentially an increase in the premium or a refusal to renew the policy.”

I asked Ortiz, “What should the homeowner consider before filing a claim?”

“First of all, look at your deductible. It would make no sense at all to submit a $500 claim where your deductible is $1,000. But more than that, it’s best to view homeowners insurance as there for something truly big — such as a neighbor’s tree falling on your house — in other words, a significant, expensive claim. If you are able to handle the loss out of your own pocket, then it is something you need to strongly consider.”

Often we hear about rates being increased after the filing of one claim. Is that often the case? “It is a good question, but there is no one answer,” Ortiz says. “Rates can be increased for reasons that have nothing to do with the claim itself, and this is where it is so important to have a good relationship with your insurance agent, to help you find the best rates for your needs.”

This issue of “Should I file a claim?” isn’t simple, and chances are that you’ve seen television commercials for auto insurance that promise no rate increase after the first accident. In some states, Allstate advertises its “Claim RateGuard” feature for homeowners, too. “With this option your rates won’t go up just because you file a claim. This allows you to actually use your homeowners insurance and not have to worry about your rates going up if you file a claim.”

Additionally, their marketing materials state, “With Allstate you can use the ‘Guaranteed Renewal for Claims’ feature. This means you won't have to worry that your homeowners policy will be dropped just because you file a claim.”

It is also important to point out that where an insurance company is able to be fully reimbursed—as in Thelma’s power surge claim — every claim person I spoke with told me that it would be unheard of to double her rates.

Wrongly Advised by Her Insurance Agent

So, why would her agent discourage Thelma from using her homeowners insurance, knowing that she only gets Social Security and does not have the money to replace all those things that were destroyed?

On condition of not revealing his identity, a Los Angeles independent insurance broker explained, “Some unethical agents provide advice in order to place their own financial interest above their client. This behavior violates our obligation as fiduciaries to our clients and can result in the agent being sued and losing the license to sell insurance.

“In this case it would seem that the agent was trying to protect his loss ratios with the insurance company by discouraging the claim from being filed. There are also some companies that instruct their agents to tell their clients not to file claims, even where the dollar value is significant and the claim would be paid.”

So I asked Thelma’s agent — well, didn’t really ask him — instead, I put it this way, trying not yell:

“You want this 82-year-old woman to just take what the utility offers her, right? You are trying to scare her with a claim that her rates will double! That is nonsense, and you know it! The bottom line is that you don’t want a claim made because you think it will look bad for you with the carrier! That’s it, isn’t it?

“You are going to help her with this claim, and you are going to stop scaring her about her rates doubling next year just because of something that was not her fault. Are we clear?”

Worry is my middle name.

Working remotely? You may want to check out these places who'll pay you to move there.
13 Costs of Owning a Cat

13 Costs of Owning a Cat

Housecats may be known for their aloofness and low-maintenance attitude, but they're not cheap. Here's what you can expect to spend if you plan on ado…
Kiplinger’s Best Firms for Customer Service: Banks, Credit Cards and More

We crunched a lot of numbers (and ran a survey) to crown top firms for their service on banking, credit cards, mortgages, and home and auto insurance.…