Check Options Before Rolling Over a 401(k)

The popular choice might not be the right one for you. 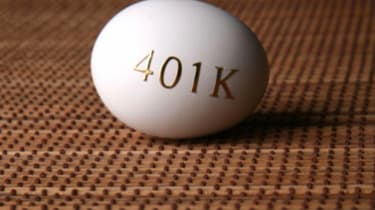 Most employees who leave a company roll their 401(k) assets to an IRA. But that simple move could cost you a lot of money if you're not careful.

Case in point: After three decades with a railroad company, Ron Blake, 58, of Shawnee, Kan., decided last fall that he would retire in early 2013. He hired financial planner Dan Weeks, of Sound Stewardship, in Overland Park, Kan., to help with the transition. Weeks found that nearly three-fourths of Blake's 401(k) was held in employer stock that had grown by more than 700%. "Red lights start flashing when you see that," Weeks says.

Instead of transferring all the assets to an IRA, Weeks advised Blake to move his appreciated company stock to a taxable brokerage account. Such a maneuver allowed Blake to take advantage of the lower long-term capital-gains tax rate. If Blake had moved the entire account to an IRA, "the company stock would have been taxed at my ordinary income tax rate when distributed," says Blake. By using the strategy, Weeks projects that Blake will save $100,000 in taxes.

Stashing company retirement plan money into an IRA may well be the best course for most people. Before you transfer 401(k) assets, however, you need to examine all the choices, and see which one will grow your nest egg the most.

A recent report by the U.S. Government Accountability Office found that 401(k) service providers tend to encourage participants to use the IRA option even when they don't know much about a caller's financial situation. In many cases, the IRAs are run by the same providers that operate the 401(k)s. "Plan participants are often subject to biased information and aggressive marketing of IRAs" when seeking advice, the GAO noted.

Taking a lump sum is usually the worst choice. The money will no longer grow tax-deferred. And you'll pay ordinary income tax on the lump sum, which when added to your taxable income may push you into a higher tax bracket. If you're younger than 55 when you leave a job, you'll pay an early-withdrawal penalty.

You don't pay taxes if you move 401(k) money to an IRA or a new 401(k). Be sure to ask the 401(k) custodian to move the money directly from your 401(k) to the other retirement account. If the employer cuts you a check, it's required to withhold 20% of the money for taxes. If you don't make up the difference when you deposit the money into the new retirement plan, the IRS will consider that 20% as a taxable distribution. Any money that's not put back into a retirement account within 60 days will become taxable.

The decision to keep the money in a 401(k) rather than moving it to an IRA hinges on investment options and fees. If you're thinking of staying put, make sure the options in your 401(k) provide sufficient diversification and are low cost. Some 401(k) investments that you may like could be closed to new investors outside of the 401(k) or cost more in an IRA because of a difference in share class.

Also, find out what account fees the IRA charges, and ask your company about the administrative fees you pay for the 401(k). Check Brightscope.com to see how the 401(k) compares with other employer plans.

Two other factors may call for keeping a 401(k). A 401(k) plan has stronger creditor protection than an IRA. And a 401(k) plan generally allows you to borrow from the account—IRAs don't.

If you keep your old 401(k), you "have the same rights in terms of managing your money," says Andrew McIlhenny, executive vice-president with Firstrust Financial Resources, in Philadelphia. But you will be subject to the plan's rules, which may, for example, restrict the frequency of withdrawals. Figure out how the rules will affect you after you leave the company.

An IRA rollover has several advantages. Primarily, the investing world is your oyster. "An employer's 401(k) gives you a finite menu. With an IRA, you can do whatever you want," says McIlhenny. When selecting a custodian, you can compare fees and look for low-cost investments, such as index funds. If you rebalance frequently, check out the trading costs.

Consolidating money into an IRA may help investors keep better track of retirement savings. "They want it all in one place," says Constance Stone, president of Stepping Stone Financial, in Chagrin Falls, Ohio. Managing one account makes it easier when it comes to asset allocation, rebalancing and even keeping beneficiary forms current.

An IRA rollover can simplify required minimum distributions. With traditional IRAs, you must calculate an RMD for each account you own, but you can take the total from just one IRA. With old 401(k)s, you must calculate each RMD separately and then withdraw an RMD from each 401(k).

Like Blake, if you hold appreciated company stock in your 401(k), you can employ a tax-saving strategy known as "net unrealized appreciation." Here's how it works: Say you have $100,000 of employer stock in your 401(k), with an original "cost basis" of $20,000 and $80,000 of net unrealized appreciation. You move the company stock to a taxable account and owe ordinary income tax—of up to 39.6%—on the $20,000. As you sell shares from the taxable account, you will owe tax on the appreciation at the long-term capital-gains rate of up to 20%. Blake comes out ahead because his projected income tax rate in retirement is expected to be higher than the capital-gains rate, says Weeks.

Also, if Blake had moved all of his stock to an IRA, his RMDs would have been large. Because Blake has a pension and doesn't need RMDs to live on, reducing the RMDs was a plus, Weeks says.

If you roll your 401(k) to a Roth IRA, you can create a tax-free pot of money. You'll pay income tax on the rollover amount, but the money will grow tax free and won't be subject to RMDs.