This teacher's investment strategy has thrived thanks to a dedication to buying shares of solid businesses and not obsessively looking at their stock prices. 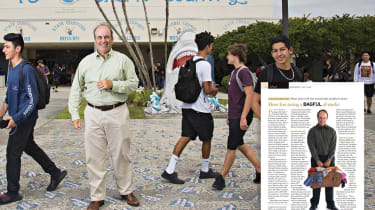 High school economics teacher Brett Burkey (pictured at left) appeared in our July 2006 issue when he asked the Portfolio Doctor (a monthly feature at the time) about his stock market strategy. Burkey, then 45, was doing well by accumulating shares of blue-chip growth stocks and letting them ride. He wanted reassurance that bucking the common wisdom to rely on mutual funds in general and index funds in particular was okay.

Ten years later, Burkey is still teaching at Spanish River Community High School, in Boca Raton, Fla., and he’s still partial to investing in individual stocks. And, he tells us, he’s prospering. Even though he “got beat up like everyone else,” he wisely stayed in the market through the collapse of 2007 and 2008. “I assumed it to be a temporary thing, and I did some buying all along.”

As he gets closer to leaving the classroom and taking his teacher’s pension—he’s in his 32nd year as an instructor—Burkey has shifted his holdings from growth stocks to stocks that pay generous dividends, such as Realty Income (O), AT&T (T) and Southern Company (SO). One thing that hasn’t changed, however, is his dedication to buying shares of solid businesses and not looking at their stock prices from day to day. He’s satisfied to receive steadily rising dividends, which he almost always reinvests in additional shares. Burkey and his wife, Diana, a commercial banker, are looking forward to a debt-free, active retirement with a dividend bounty to help support it.

In addition to cultivating his own port­folio, Burkey has incorporated his sideline interest in finance into his profession. He has developed a popular course in personal finance for freshmen at his high school. Six sections of 30 teenagers each get a semester’s grounding in financial literacy, starting with the basics of credit and banking and moving on to how to buy a car and pay for college. And yes, he issues each student $50,000 of virtual money so the students can simulate stock portfolios.

Burkey is also working to persuade other educators in Florida to make personal finance a high school requirement. He has testified in front of the state legislature in Tallahassee and gives workshops at Florida Atlantic University for public school teachers who would like to introduce personal finance content into their classes—a gig he plans to continue after he retires. “Managing money and investing wisely are critical survival skills for teachers as well as rising generations of students,” says Burkey, because younger teachers aren’t assured of long careers and a secure pension.