High incomers can use the "backdoor" Roth strategy, but beware the pitfalls. 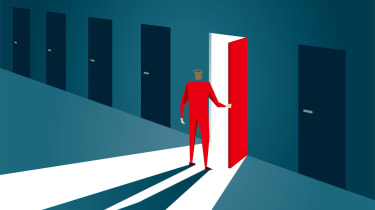 Want to put money into a Roth IRA but your income exceeds the thresholds for contributions? You can employ the "backdoor" Roth strategy.

That's a way Paul Missel is building a tax-free pot of retirement money. Missel, 59, works for a pharmaceutical company in Fort Worth, Tex., and his income is too high to make direct contributions to a Roth. Instead, he makes nondeductible contributions to a traditional IRA and later converts the money to a Roth. There are no income limits for conversions.

Missel is a big Roth fan because the money grows tax free, and he will not have to take required minimum distributions when he turns 70 1/2, as he would with a traditional IRA. "It's the tax liability of RMDs that's driving me forward doing this," he says.

Working Around the Pro Rata Rule

But some workers may be able to circumvent the pro rata rule with what financial planner Kevin Reardon calls a "401(k) rollup." If you participate in a 401(k) plan that allows you to roll IRA money into it, you can move all your deductible contributions and any pretax earnings into the 401(k). Because employer plans only accept pretax money, just the nondeductible contributions will be left in your IRA -- and you can do a tax-free conversion to a Roth, says Reardon, founder of Shakespeare Wealth Management, in Pewaukee, Wis.

Another way to sidestep the pro rata rule: If your nonworking spouse doesn't have a traditional IRA, you could make nondeductible contributions to a spousal IRA for her. She can then convert the money to a Roth tax free. Because IRAs are not joint accounts, the husband's traditional IRAs aren't counted with hers when tallying up the wife's traditional IRA balances, says Michael Kitces, the director of planning research at Pinnacle Advisory Group, in Columbia, Md.

Whatever way you use the strategy, you want to show that each move is independent of the other -- and waiting between the two steps is a way to do that. But advisers differ on how long you should wait.Kitces says he advises his clients to hold off for a year. However, the longer you wait, the more the account may grow, which will increase your tax bill on the earnings when you convert. But assuming you plan to keep the money in the Roth for a number of years, Kitces says, "the fact you waited a year is irrelevant."

Jeffrey Levine, IRA technical consultant with Ed Slott and Co., suggests waiting one statement cycle. The paperwork will show the money was put into a traditional IRA first, and you can get the money into a Roth sooner for tax-free growth.

Done right, virtual financial planning meetings can be just as productive (or even more so!) than in-person ones.
How a Second Stimulus Check Could Differ from Your First One

The HEROES Act, which the House passed in May, would authorize another round of stimulus checks. While the new payments would be similar to the first …
What Trump's Payroll Tax Cut Will Mean for You

President Trump issued an executive order to suspend the collection of Social Security payroll taxes. How much will it save you?
Drawing Down Retirement Savings in a Pandemic