Live and Work Abroad When You Retire

Some baby boomers are pursuing their 'encore' careers overseas. 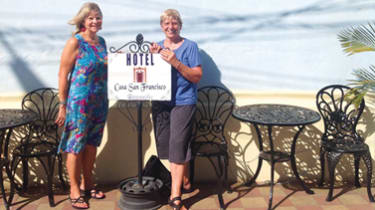 In 2001, Terry Leary and her sister, Nancy Bergman, were traveling in Nicaragua. They stopped for a few nights in Granada and were so enchanted with the quaint lakeside town that they decided they'd like to live there permanently. Within a week, Leary, 65, and Bergman, 69, purchased a property in Granada with plans to open a small hotel. "I had always said that someday I wanted to run a B&B in Latin America," Leary says.

After a year and a half of renovations, Leary realized that dream. She and Bergman opened the doors to Hotel Casa San Francisco (www.hotelcasasanfrancisco.com), a boutique hotel with a tapas bar in the heart of Granada's historic district.

Leary and Bergman, natives of San Francisco, worked in various places across the globe before relocating to Granada. Leary spent her career as an independent contractor for the U.S. Agency for International Development and continues to do consulting work for the organization. Bergman was formerly a flight attendant. She also previously worked as a real estate agent and continues to sell real estate in Nicaragua.

Leary acknowledges the common perception that opening a business in Latin America brings with it a certain amount of "red tape." She says finding trusted local business advisers and learning the language are two keys to success. "Everybody talks about bureaucracy in these other countries, but our bureaucracy in the U.S. is so much worse," Leary says. "You just have to find somebody who knows the system to help you."

Lured by warm climates, beautiful scenery and lower cost of living, an increasing number of older Americans are opting to retire abroad. And just like many retirees in the U.S., a large number of expats are continuing to work, says Betsy Burlingame, founder of Expat Exchange (www.expatexchange.com), a Web site with resources for Americans living overseas. Of the baby boom generation, Burlingame says, "a desire to push boundaries and explore new frontiers has always been a hallmark of this group, which is now retiring in large numbers."

As with their stateside counterparts, some overseas encore careerists work because they need the money, while others desire to explore a new field. Burlingame points expat work-seekers to her site's international jobs section and the site's message boards, where they can connect with Americans already living abroad.

Before you move to a country, you should find out how difficult it will be to obtain a work permit—and whether you can even get one. Also check out how tax liabilities will be handled.

People who want to live overseas but need to earn money have to be creative. Retired dentists and physicians sometimes open small practices in their new locales. Some people are able to telecommute or consult for their former U.S.-based employers with nothing more than a laptop and an Internet connection. Financial advisers and accountants can create businesses helping other expats organize their financial lives. "Retirees often find jobs teaching English, working at hotels and giving tours to English-speaking travelers," Burlingame says.

Retirement also can be an ideal time to start a business. Maybe you've always dreamed of running a yoga studio or opening a coffee shop. "In some cases, starting a business that employs locals may be an easier route than finding a job because it's seen as an investment in the country," she says.

Retired Americans hoping to launch a business may find some foreign cities more ripe with opportunities than in the U.S. David English, author of Expat Entrepreneurs in Argentina: Ten Success Stories, says that some Central and South American countries don't yet have many of the products and services available in the U.S., and savvy entrepreneurs can fill those gaps for consumers. "You can take a risk because far less capital is required than in a mature market, so the U.S. dollar can go a lot further," he says.

As wine lovers, Tom Phelan, 72, and his wife, Yvonne, 69, had often fantasized about buying a vineyard when they retired from their real estate careers in Phoenix, Ariz. But when they started researching options in California's wine country, it seemed they couldn't afford to finance their dream. "When we got ready to semi-retire seven years ago, we started seriously thinking about it, but land in Napa and Sonoma was $300,000 an acre," says Tom Phelan.

Then, on a business trip in Argentina, Phelan discovered he could purchase a sprawling piece of land for a fraction of that cost. For just $132,000, the Phelans bought 108 raw acres in San Rafael in 2007. Tom and Yvonne moved from Phoenix to San Rafael to oversee the development of what would become La Vida Buena Vineyard.

Once their vineyard was up and running, the Phelans encountered other Americans interested in following in their footsteps. So they started selling off developed plots of land to other would-be winemakers. Their Web site, Argentine Vineyards for Sale (www.argentinevineyardsforsale.com), gets 13,000 hits a month, Phelan says. "Our goal is to sell enough vineyards so that we can build a house on the land and keep one vineyard for ourselves," he says.

Phelan says Americans should be extra cautious to avoid scams and unfavorable business deals, especially if they don't speak the native language. "Far too many people come to a foreign country and want to believe whatever they want to do, like open a restaurant or a bodega, is a piece of cake," he says.

Phelan assembled a team of local experts, including a lawyer, an accountant and a land surveyor. His wife speaks fluent Spanish, which Phelan says was invaluable in dealing with advisers and workers in Argentina. His advice for expat entrepreneurs: "Don't pay upfront, and get everything in writing."

Phelan also recommends renting an apartment and spending a month or more in a country before buying a home there. "If you visit a place for three or four days, you are a vacationer," he says. "But after four or five weeks, you will be able to see if you like the area, the food, the culture and the people."

English says the most successful expat entrepreneurs have spent enough time in a foreign city to know what kinds of businesses locals or tourists are likely to patronize. "One friend came [to Argentina] and couldn't find a good English-language tour company, so he started his own tourism company," English says.

It's also important to keep in mind that the way business gets done in foreign countries may be different from what you're accustomed to in the U.S. Expat Exchange co-president Joshua Wood says in France, for instance, it may take time to cultivate professional relationships. "You are not supposed to bring up too much business in that first lunch—that is considered bad form," Wood says. "You will probably have a second lunch, and that is when you will discuss business."

Volunteering as a First Step

Volunteering also can be a good way to get your foot in the door and determine whether you enjoy living and working abroad. International Executive Service Corps (www.iesc.org) recruits retirees from a variety of professional backgrounds and matches them with foreign companies. For instance, one volunteer who spent his career as a vice-president at McCormick & Company has traveled to Morocco and Sri Lanka to help spice companies improve their marketing efforts. The international companies receiving services pay for volunteers' housing and airfare and provide a per diem for living expenses.

International Senior Lawyers Project (www.islp.org) dispatches retired lawyers to many African and Latin American countries to advise nongovernmental organizations and other groups on legal matters. Spokeswoman Andra Moss says projects typically last from a few weeks to three months. The group covers airfare and housing. Moss says volunteering could be a good first step to landing a permanent job overseas. The volunteers, she says, "are giving of their time and talents, so a lot of positive relationships develop from that."

Depending on where you move, you'll likely find the cost of living is much lower than in the U.S., which means your nest egg buys a lot more. "I have a six-days-a-week housekeeper and a personal trainer I work with three times a week—and the food is cheaper and it tastes better," Leary says. "Here, I can live like a queen."

Leary says she rarely needs a vehicle, so she shares a car with a friend, and auto insurance costs just $50 a year. She estimates her total living expenses are $1,800 a month. What's more, Leary says health care is very affordable in Nicaragua. "We have great medical coverage and a state-of-the-art hospital," she says. "It costs $99 a day to go to the hospital—you can't go to a hotel in the States for that price."

Build a cushion to protect your income from an unforeseen crisis.
Back in School Decades Later

Getting a degree or certificate in retirement or later in life can have its advantages.
Help! I Can’t Afford to Sell My Business

Even if the deal sounds good on the surface, the effect on your personal finances may shock you. If so, you have options.