Passing on the Family Business

Smooth the transition when handing the reins of your company to the next generation.

EDITOR'S NOTE: This article was originally published in the March 2008 issue of Kiplinger's Retirement Report. To subscribe, click here.When David Chapman and his brother, William, took over their father's business in the 1970s, it had just one location. Now Chapman Cole & Gleason Funeral Homes has six Massachusetts facilities, with two more in the works. David, 59, and William, 66, spent about two years making plans to pass the enterprise to their children.

"Rather than sell to a corporation, it would be nice to have them run the business for as long as they'd like," says David, who lives in Falmouth. "It's been a good business for my brother and myself."

While business owners typically make more money by selling to a third party, many want to keep their companies in the family. "If it's a growing and thriving business, it should appreciate and produce income for the kids," says Amelia Heath, a lawyer in Portland, Ore., with Davis Wright Tremaine. "If the kids are involved, then giving them the business can be a good choice."

Before you decide to pass your business to the next generation, be certain that at least one of your children is capable of running it. "If you have kids who are not a part of the business, have no skills in that type of business and have no interest in the business, then they probably shouldn't be an owner or shareholder," says Michael Ciesla, a lawyer with Ciesla & Ciesla, in Northbrook, Ill.

Business-succession experts say the earlier you start planning, the better -- ideally at least five years before you retire. Parents should draw up a detailed plan to prepare for the takeover. To ensure that the child is meeting expectations, parents could consider a regular third-party review after he or she becomes the boss. "The key is to clearly identify the roles and responsibilities of the successor in a written plan," says David Goad, president of Succession Planning Consultants, in Newport Beach, Cal.

If you split the company between two siblings, be sure to create a governance agreement, which outlines ways for them to deal with differences. A board of advisers could help mediate disputes. "Without Dad as referee, we find that the kids would be at each other's throats," says Herbert Daroff, a lawyer with Baystate Financial, in Boston.

One mistake, says Daroff, is to give the involved son the business equity, while giving the uninvolved daughter the real estate. That would make one sibling the landlord for the other sibling. If the son wants the daughter to pay for a new driveway, for example, she could argue that his trucks tore it up.

You should see an expert on succession planning to figure out the best way to structure the transfer. The option you choose will depend on how much income you'll need and whether you want to maintain some control. The possible tax hit differs with each option.

One route is an outright gift. This would remove the firm's value from your estate. However, says Heath, you'll owe gift taxes on any value that exceeds the $1 million lifetime gift-tax exemption ($2 million for a couple). Also, you'll sacrifice any proceeds you could get from a sale to your kids.

When a parent sells the firm to the kids, the owner's payments from the sale typically come from the company's profits -- not the kids' pockets. You can create an agreement setting out a payment schedule. The drawback is that you'll likely pay capital-gains tax on any increased value of the business since you started or acquired it. Also, the value of the payments could end up back in your estate.

If your business exceeds the value of the gift-tax exemption, you could use a combination of gifting and selling. For a company that's worth $6 million, a couple could use their lifetime gift-tax exemption of $2 million. The kids would pay their parents the $4 million. "The kids then get the company," says Ciesla. "Mom and Dad get their stream of income." But the parents could face a capital-gains hit.

Another way to make some money, while reducing gift and estate taxes, is to create an irrevocable grantor retained annuity trust. You would transfer part of the business to the trust. Based on the value of the assets, you'd be paid an annuity for a certain number of years. The kids would run the business, but gain ownership after the term of the trust expires.

If you want to maintain control, you could keep 50.1% or more of the equity and pass the rest to your son or daughter. Ciesla recalls a client who split 94% of the shares between his two kids. The father kept 6%. "He thought everything was going to be fine. But in case it wasn't, he was the tiebreaker vote," says Ciesla. The more equity the owner keeps, however, the greater the possible estate-tax bite.

Another control mechanism is recapitalization. You can transfer equity to the children, along with, say, 999 non-voting shares, while keeping one voting share for yourself. Your children make the day-to-day decisions, but that voting share allows you to make the big decisions. But, retaining voting interest could keep a portion of the firm's value in the estate.

Daroff uses several techniques to eliminate estate taxes. Besides the gift-tax exemption, a plan could include a deferred compensation obligation that would promise future payment to the parents. This debt would reduce the firm's value -- and estate taxes.

The Chapman brothers have already passed the business's equity to their kids, who are in their thirties. They transferred one-third to each of William's two sons and David's son. But David and William still hold voting power. "We're not that old, so we'd like to continue to exert some control,"says David Chapman.

These all-too-common misconceptions can steer your estate plans in the wrong direction right from the start. Here’s how to overcome them and tips to b…
Take Charge of Your Portfolios, Ladies 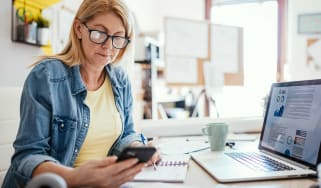