During the housing boom, new-home builders were like the hosts with the hottest invitation in town. They could raise prices with every newly opened phase of a development and display a "take it or leave it" attitude toward buyers. Now, amid the downturn, homebuilders are the hosts everyone avoids. In July, new-home sales nationwide were down 10% from the previous year, and the National Association of Home Builders expects them to continue falling until the second half of 2008.

The decline in home starts (down 25% nationwide for the year ended in July) and permits for future projects (down by almost one-third) reflect builders' much-reduced expectations. In many formerly hot markets, they've pulled back even more. In Orlando, Fla., and in Riverside-San Bernardino, Cal., east of Los Angeles, permits are down nearly 50%. In Las Vegas and the Twin Cities, they've decreased nearly 40%. The more inventory on the builders' books, the greater their carrying costs and the more motivated they are to cut a good deal. That spells opportunity for new-home buyers. 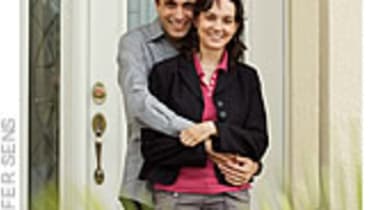 You may not have to work too hard to get what you want. In Washington, D.C., agent John Sullivan says developers are "caving like crazy." He remembers one deal this past summer: "I might be exaggerating to say that I 'negotiated' a price cut," he says, "because as soon as we expressed interest in the condo, the sales rep offered to take $30,000 off the price." The builder also threw in a two-year lease on a second parking space.

A bargain in Orlando

Gita and Rahul Sukthankar, both 37, relocated to Orlando from Pittsburgh in August. Gita had accepted an assistant professorship in computer science with the University of Central Florida, and Rahul planned to telecommute for his employer, Intel Research. They looked forward to buying a new home after years of renting. On their first trip to Orlando with agent Eve Alexander, they found a home under construction by Morrison Homes that would be completed in August. The location was right, and the community offered lake views, mature trees and a model with a floor plan they liked.

The single-family home, with four bedrooms, three and a half baths and a two-car garage, was listed at $422,432. Because the home was a "quick move-in" property, meaning the builder was about to close out sales in the development, the builder advertised a $10,000 price reduction. Alexander thought the buyers could do better. "I was hard-nosed in negotiations because I felt we could squeeze the builder," she says. The couple were able to buy the home for $355,332 -- a price break of almost $67,000.

The Sukthankars comparison-shopped the builder's financing -- a 30-year fixed rate of 5.875% -- and found it to be competitive. The builder offered an additional incentive with its mortgage: 6% of the purchase price for closing costs. At Alexander's request, the builder also agreed to screen in the porch -- a necessity in buggy Florida. Plus, the builder required only a $500 deposit, from which the couple could have easily walked away if they changed their minds.

How far can you go?

Builders generally don't advertise price cuts, except for quick-move-in properties, lest they scare off nervous buyers and antagonize current owners who bought at higher prices. The closer builders are to finishing a development, the more likely they are to discount prices, either directly or through upgrades.

During the recent boom time, some builders snubbed buyer's agents and forced buyers to deal exclusively with their sales agents. But today, motivated builders advertise incentives for buyers and commissions for agents. In the West and in Washington, D.C., builders are advertising commissions of 4% to 6%; but in Orlando, some builders have been offering 10% to 20%. St. Louis agent Bill French explains that those are like "neon signs saying 'Make me an offer!' "

How low you can go will depend on the market, the builder and the development. In Raleigh-Durham, N.C., where single-family-home permits in June were down only 9% from the year before, agent A.J. Ferguson says "we're not having a fire sale here" and notes that some developers are facing high demand and don't need to negotiate. But in Orlando, Realty Executives agent Trudie Hammond says, you could make an offer based on 2004 home prices, cutting out the frenzied appreciation of 2005 and 2006, and adding back the local market's 6.5% historical rate of appreciation for those two years.

In a market in which negotiation counts, you'll do well to hire a buyer's agent to help you identify good prospects and to frame and negotiate your offer (to find an exclusive buyer's agent, go to www.naeba.org). Look for one who is knowledgeable about your area's new-home market -- its dynamics, values, builders and subdivisions.

If you're buying a home that's under construction, look for an agent who has the experience to shepherd you through the building process, which is closer to custom tailoring than buying off the rack. If you can't be present during the process, your agent needs to act as your proxy for such things as inspections and walk-throughs.

To enhance your negotiating strength, enter the sales office with another builder's literature tucked under your arm and be prepared to walk out, even if you love the community or home. Stroll through the development and talk with current owners about their experience with the builder and the kind of deal they worked out. That's a surefire way to double-check the builder's reputation for quality, customer service and openness to haggling. When you're ready to negotiate, you can say, "I spoke with the Smiths, and I know that you upgraded their carpet and installed better crown molding for free."

Accept upgrades in lieu of a price cut only if you want them, they're a good value and you're not improving the home beyond the scope of the neighborhood. If a home appeals to you only with significant upgrades, look at a more expensive neighborhood where the builder has already included those features in its base price.

To lure buyers, builders have been offering a lot of incentives. But in exchange, they'll probably require you to take out your loan with their mortgage subsidiary or affiliated lender. For example, early this fall, Pulte Homes offered buyers in selected Riverside-San Bernardino developments up to $50,000 in options if they took their loan from Pulte Mortgage. The buyers could spend their incentives on interior design, garage enhancements, an in-ground swimming pool, home-entertainment components, an outdoor kitchen and backyard landscaping, plus financing options, such as closing costs or an interest-rate buydown.

Compare the lender's offerings with those of another lender, using the truth-in-lending statement to see the annual percentage rate (it may be up to one-fourth of a percentage point more than the rate at unaffiliated lenders) and the good-faith estimate of closing costs. Any incentives should increase the home's value over the long term.

If the builder "gives" you a plasma TV, a vacation or a Harley-Davidson motorcycle, you'll be paying interest on it over the next 30 years. First-time home buyers might want to take the builder's financing and incentives if they won't have enough cash available after closing to pay for things the community's homeowners association will require. That could include landscaping, a lawn-irrigation system, a backyard fence and window coverings.

Once you have agreed on the base price and signed the purchase contract, the builder will invite you to visit its design center to customize your home with "selections" that will be itemized in an addendum to your contract. "Buyers know it as the design center, but in the builder's boardroom, they call it the profit center," says Guy Pahud, an agent in Indianapolis. "They're designed to get you to overspend." He urges his clients not to gold-plate their new homes with choices that won't enhance value or marketability at resale and to avoid trendy options for which builders will charge a premium.

Check out the builder

A hot deal won't be worth much if your builder turns out to be unreliable or your home is a lemon. Ask acquaintances for referrals and rely on your agent's experience to steer you toward builders with reputations for high quality, good communication and customer satisfaction.

Check the J.D. Power and Associates 2007 New-Home Builder Customer Satisfaction Study, which lists top-rated builders by city (www.jdpower.com/homes). Search the Internet for the builder's name and the word "problem" to find blogs written by unhappy customers. Call the Better Business Bureau, the local homebuilders association and the local agency that licenses general contractors to see whether clients or subcontractors have registered complaints. Then ask the builder to explain them.

If subcontractors haven't been paid, the builder is likely having financial difficulties. Local agents, real estate lawyers and title-insurance companies with whom you're doing business may have the inside scoop on this. Bill French, the agent in St. Louis, says that although traditionally you can get a good deal when a builder is opening a new development, playing pioneer may not be such a good idea during troubled times.

NEXT: How to Negotiate a Good Contract

With remote work on the rise, more people are looking for a permanent getaway.
Timely Reasons to Buy a Vacation Home

With remote work on the rise, more people are looking for a permanent getaway.
13 Tax Breaks for Homeowners and Home Buyers

Buying a home may be one of the biggest purchases you will ever make.
Skip to ContentSkip to Footer