Do Not Expect the Stock Growth of Recent Years to Continue

What drove the incredible returns that stocks posted from the end of 2008 through September 2015? Nothing real. 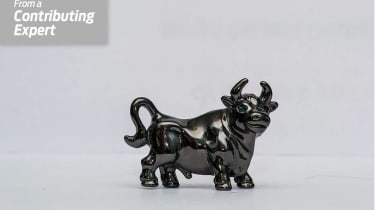 "Men, it has been well said, think in herds; it will be seen that they go mad in herds, while they only recover their senses slowly, one by one." ― Charles Mackay, Extraordinary Popular Delusions and the Madness of Crowds

Since the end of 2008 through the third quarter of 2015, Standard & Poor's 500-stock index was up about 134%. Very impressive. Many will see this number and not inquire further. We see the number in the context of other numbers and wonder how in the world it did it. What drove the market up for six years? Was it earnings? Was it a great economy? Was it value?

Let's examine the economy, in terms of gross domestic product (GDP). According to the Federal Reserve, the GDP grew 26% since the beginning of 2009, an average of 3.36% annually. The stock market grew more than five times what the economy grew. Economic growth was hardly a catalyst for the market's performance.

Next let's look at earnings. We have heard great things about earnings for the past few years. The S&P 500's operating earnings grew 110% since 2008. However, that high jump is really just some balance sheet gymnastics; the starting point for that period of gains was when earnings were crushed due to the 2008 bear market. If you look at the index's performance from the previous market peak in June 2007 through September 2015, earnings are up only 13.85% total while the market is up 33.15%, almost 2.5 times the earnings growth. This gives a more realistic view of the long-term earnings growth. Earnings were up, but the market was up a lot more. Earnings weren't the catalyst.

Since earnings did grow, sales must have been up considerably, right? S&P data shows sales were up 9% total. Not annually, total—from the end of 2008 through the third quarter of 2015, there was only 9% sales growth. This meager sales figure gives further credence to the belief that much of the earnings over the past several years have been due to balance sheet and income statement manipulations rather than good old-fashioned business growth. Sales weren't the catalyst.

So what was the main catalyst of the market rally?

Our research shows that it was liquidity from the Fed. As the Fed pumped liquidity into the system, that liquidity found its way into stocks. The only number that comes close to having an impact on the value of stocks is the Fed's increasing its balance sheet by 128% since the beginning of 2009 (as shown in the chart below).

(Some may retort, "But the markets made money for the past six years, so they did something right?!" To those people, I will point out that heroin dealers also make money, but it doesn't mean how they did it was right. The Fed has been acting more like a drug dealer for the past decade or more, and the markets have been its shady street corner. Investors are hooked on what the Fed is selling.)

What does this mean? Today's market is way out of whack with reality: sales growth, earnings growth and economic growth clearly do not track with the stock growth of recent years. Even with the latest correction, the market is still bloated. For it all to make sense, sales would need to catch up, showing that companies are focused on actually growing their businesses and creating better value, and the economy would need to suddenly accelerate. Otherwise, the market needs to become "real" again. This means stocks would have to fall back to where they belong, based on historical norms—to match the economic reality, that means the market could go 30% to 60% lower.

So what does an investor do? Realize that what we witnessed the past few years wasn't real, and do not expect it to continue. Carefully review your holdings and reduce risks. Eliminate the most overvalued holdings first. Don't forget to look at your mutual funds—they are made up of stocks and can be just as overvalued. Being in a mutual fund doesn't keep them from declining to normal levels.

Of course the Fed could step in and make an artificial market even more so. Could it come to the rescue again? Does it not see the damage they have already done to the markets? Does it not realize that pumping up its balance sheet only resulted in a meager increase in the economy and sales revenue, that its policy failed?

The Fed may very well be out of ammunition to prop up the economy and market. Those that are waiting for it to rescue the markets again could be sorely disappointed.