Why I Still Love Apple

The tech giant’s share prices have gotten pummeled lately, but its business still has staying power. 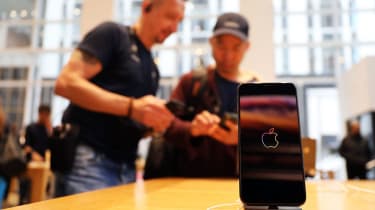 I have a bad case of technophobia. So when I needed a new cell phone recently, I really didn’t want to buy one online. I prefer to buy in-store, where a twentysomething salesperson can perform the technical magic required to get the new phone working and transfer the data from the old phone. But the line to see a salesperson at the store was so long that I decided to order a new iPhone X on the internet and give home setup a try.

After the phone arrived, I left it in the box for a few days while I mustered the courage to struggle with the activation instructions. When I finally opened the package, however, I found that the directions were delightfully short. The step I was most worried about—transferring my data from one phone to the other—was so easy it made me an Apple customer for life.

The instructions simply said to put the old phone and the new phone near each other. That apparently allowed them to talk among themselves. When I picked up my new iPhone five minutes later, it knew how to reach my mother, had the photos and text messages that I wanted to save, and allowed me to flip back and forth to my multiple e-mail accounts. It was magic.

A huge drop. This story is my way of explaining why I don’t panic when Apple shares (AAPL) get beaten to a pulp, as they have lately. Apple is the largest holding in the Practical Investing portfolio by far, accounting for about 16% of the portfolio’s total value. A few months ago, my 362 shares were worth more than $84,000. Today, they’re worth just under $61,000.

The company’s earnings report triggered the sharp decline. Although earnings were exceptional, Apple also said that it would stop reporting how many iPhones are sold each quarter. Analysts speculated that the firm’s growth had cratered, which would make its shares overpriced. The stock plunged from $221 per share to $168.

When so much wealth is riding on one stock, shouldn’t I do something? I don’t think so, for several reasons.

First, I love owning stock in companies that make the products I buy. It allows me to evaluate sales and profits from a customer’s perspective, which in Apple’s case keeps me bullish. Largely because of intuitive features that enable Luddites like me to thrive in the Apple ecosystem, I own nearly every product Apple makes.

Second, although I’m mildly interested in what analysts have to say, my interests are not well served by reacting to their frequent changes of opinion. After all, if I sell a stock in a taxable portfolio, I must pay taxes on the gains. Then I have to find a stock to buy that’s more attractive than the one I sold. That’s tough to do.

To be sure, Apple is probably not going to grow as fast as it has in the past. For the fiscal year that ended September 30, the company reported that sales rose 16%, to $265.6 billion, and profits soared 23%, to $59.5 billion. Maintaining that pace given Apple’s size is practically impossible. Still, analysts expect the firm’s profits to rise 12% in fiscal 2019 and 11% the following year.

At a recent price of $168 per share, the stock is selling for a reasonable 13 times projected earnings, and paying $2.92 per share in dividends, for a yield of 1.7%. That keeps Apple solidly in my comfort range. (I like to buy stocks when their price-earnings multiple is less than the sum of the firm’s projected earnings growth rate plus dividend yield.) If I didn’t already own so much of the stock, I’d be tempted to buy more.

I know stock prices are going to swing based on Wall Street’s mood. But I believe that over the long haul—which is what I am investing for—stock prices reflect the underlying value of the company and its products. I see no reason to believe that Apple is less valuable than it was a few months ago.