Thousands of retailers shut their doors last year, and thousands more will do the same this year. 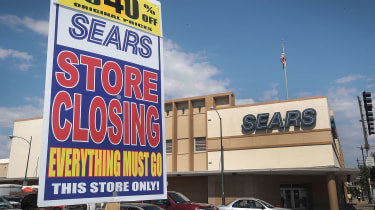 Moody’s lead retail analyst Charlie O’Shea didn’t sugarcoat his outlook last year regarding retail store closings in 2018. He plainly said, “I think the early part of next year will be pretty bad … I think it will be tough.”

Following approximately 7,000 total store closures in 2017, a Business Insider analysis projects another 3,600 closings this year. Marketing and data analysis firm Cushman & Wakefield thinks it will be much worse than that, anticipating more than 12,000 store closings this year as more merchants decide to bow out.

The store closings won’t just come from obscure companies that lack enough scale to remain viable. Some of the victims are highly recognizable names that used to be the pillars of the shopping world. Privately held Toys R Us, the former king of toys, announced that it will close or sell all of its 800-plus U.S. locations as it navigates the bankruptcy process. Even with a turnaround in view, department-store chain Macy’s (M) is still pulling the plug on some of its locations.

We’ve seen some proverbial green shoots from certain retailers, to be fair. Macy’s has dropped believable hints that it can remain viable in a digital world, particularly if it sheds dead-weight stores. Electronic retailer Best Buy (BBY), under the leadership of turnaround guru Hubert Joly, has stopped the bleeding started by online rival Amazon.com (AMZN). Even Target (TGT) has found a way to compete with bigger brick-and mortar rival Walmart (WMT) and e-commerce behemoth Amazon at the same time.

But not all retailers have found ways to survive – let alone thrive – in a world where the internet has not only proven disruptive, but also where consumer preferences have shifted. Case in point: According to a Harris Group study, 72% of millennials say they’d rather pay for a memorable experience than purchase actual goods (and more affluent older shoppers are increasingly leaning in that direction).

With that as the backdrop, the list of companies closing down stores this year is deep and wide, meaning not only are a large number of retailers shuttering some stores, many of them are shuttering a whole lot of stores. This list will be updated throughout the year when and if other retailers make additional announcements.

It’s certainly a tidal wave of store shutdowns. But do not assume that a shrinking footprint automatically implies fiscal trouble.

“This is not the ‘end of the world’ for the industry,” says Tom Erskine, chief marketing officer and senior vice president of product for retail merchandising software company One Door. “Net store openings and closings were positive in 2017, and forward-thinking retailers are quickly learning how to take advantage of their store footprints as a way to create new, highly differentiated customer experiences.”

The point? Sometimes closing some units’ doors is a smart strategic move. Sometimes.

However, other times, store closures are the sign of weakness they appear to be. Take Sears, for instance. It announced shortly after 2017’s all-important holiday shopping season that it would shut down 64 Kmarts and 39 Sears stores, extending a multiyear streak of closures that reflects a multiyear streak of declining revenue. But these closures have not helped Sears improve its business. Same-store sales, which measures retailing success without penalizing the organization for the loss of sales simply due to store closures, fell a steep 15.6% year-over-year during the holiday quarter.

It’s a clear clue that management isn’t properly using its remaining resources to somehow get patrons back into its remaining Sears and Kmart locations.

The trick appears to be a successful combination of online and offline business. Last year’s year-over-year improvement in United States’ retail spending was a solid 3.9%, but the e-commerce sliver of that growth was up roughly 11%.

That largely influences our look at some of the retailers that may be altogether gone within just a few years, victims of obsolesces and more culturally-relevant alternatives like Amazon.