Dial Down Risk in Your Bond Portfolio

Rising interest rates are no longer the primary concern for income investors, but other factors must still be considered threats against bonds. 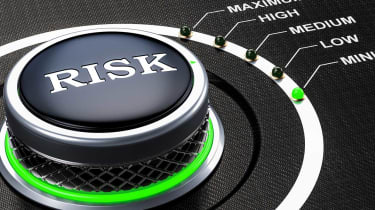 Federal Reserve chief Jerome Powell removed a primary peril to bonds recently when he renounced additional credit tightening. His pledge rewards both long-standing bond investors and prescient traders who expected the recent, sharp rally. Powell also embarrassed the crowd of fixed-income bears, including bond big fella Jeffrey Gundlach. Gundlach recently foresaw the 10-year Treasury yield stepping on an elevator to 6% in a year or two, leading to possible double-digit percentage losses of principal. Rather, the 10-year yield is down from 3.25% in late 2018 to 2.66% as of February 15. I predict it will hover at or below 3% for the time being.

Powell’s retreat rests partly on the evidence that inflation will stay low despite accelerating growth in wages and salaries. Drastic price drops in copper, corn, gasoline, lumber and sugar over the past year are counterinflationary. So are the weakness in housing and car sales.

Two of my favorite funds, Loomis Sayles Bond (symbol LSBRX) and Fidelity Capital & Income (FAGIX), have more than regained last year’s losses. Gibson Smith, who once headed fixed income for Janus Funds and now has his own firm, says the market’s tone has swung “from what could go wrong to all the things that could go right.”

Let’s not get overconfident. It may appear untimely to discuss de-risking now. But it’s possible to become overconfident in bonds, just as you can in stocks when the indexes set record after record. Gundlach’s predictions have a habit of coming true, after all. The thoughtful team at TCW Funds is sounding alarms about the credit quality of medium- and lower-grade corporate bonds. Plus, let’s face it: If in the coming months the President and Congress fail to reach a compromise on the government’s borrowing power, the specter of a default could loom. That would kneecap U.S. government securities and crush corporate and municipal issues, whose prices and yields reflect a gap, or spread, over the rate on presumably ironclad Treasury obligations.

Eaton Vance lists 28 risks in the prospectus for its multisector bond fund. “Interest-rate risk,” or the chance that the value of your bonds or bond fund shares will fall because rates move higher, is just one. I’d be equally attentive to these other hazards:

Bonds denominated in foreign currencies lose value when the dollar rises. Yes, foreign bond funds are a portfolio diversifier and are doing well in early 2019, but I’d go easy on these assets.

It’s not out of the question that either the U.S. government or a struggling state or locality will refuse, or be unable, to pay principal and interest on time. You can’t avoid all exposure to Uncle Sam, and I’m not suggesting defaults are nigh. But if you own corporate or municipal bonds from poor or struggling issuers, you might be happier cashing them in.

Worries that a bunch of investment-grade corporate debt will be downgraded to junk (rated BB or below) seem overdone. Still, I would not overcommit to near-junk or junk bonds (or funds).

The high federal deficit means huge increases in Treasury debt issuance. For now, there are enough buyers at current interest rates. But if the government borrows far more heavily in the years ahead, long-term investors will insist on higher yields. I don’t see the point in buying a 30-year government bond at the low yield of 3.0%.

This is tying up money long term without enough yield to compensate. If you don’t get much extra income from owning a 30-year bond instead of a five- or 10-year note (or a fund with a comparable average maturity), then avoid the longer-term holding.