Hot-button issues this year include climate change and board diversity. 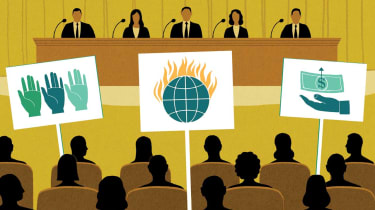 This proxy season, big mutual fund companies and investors alike will get a chance to make their voices heard by corporate executives on key issues.

Shareholders will likely file 800 to 900 proposals—also called resolutions—this year with the goal of bringing a variety of initiatives to a vote at annual shareholder meetings. Top issues for 2019 proposals include climate change, corporate political contributions and gender diversity on executive boards. Although management isn’t obligated to act after the shareholders vote on such proposals, a majority vote in favor of a resolution sends a powerful message that executives often heed. Last year, for instance, a 69% vote in favor of disclosures on firearm safety at gunmaker Sturm Ruger prompted the firm to follow suit. In 2017, ExxonMobil agreed to produce reports on climate change after 62% of shareholders voted for the proposal.

Those resolutions were noteworthy not only because of the results but also because of who voted in favor of them: major mutual fund providers. Until 2017, firms such as Vanguard, BlackRock and State Street (which collectively manage about $14 trillion in investor assets) typically either voted their proxies in favor of executives or stayed above the fray entirely. “Mutual fund companies are recognizing that issues such as climate change represent risks that affect these companies’ bottom lines,” says Heidi Welsh, executive director of the Sustainable Investments Institute, an investing research firm.

Still, she expects mutual fund firms to stay away from more politicized issues, such as immigration policy and corporate political spending. Mutual fund voting has boosted support for environmental and sustainability-focused shareholder resolutions. The average vote in favor of such proposals reached a record-high 24% in 2018, up from 15% a decade earlier.

Companies must also consider another important shareholder group: their own employees. Once a perk reserved for executives, stock-based compensation is increasingly making its way to the rank and file, especially at tech firms. Shareholding employees at Amazon submitted a proposal in December asking execs to take action on climate change. Last year, Alphabet employees joined a proposal that would have linked executive pay to diversity initiatives. Employees who are also shareholders have a better chance of being heard on issues that are important to them, says Welsh.

Last year, shareholders withdrew about 30% of all proposals they filed. Oddly enough, that indicates a win for shareholders. If a resolution is withdrawn before it can come to a vote, it’s typically a sign that management has agreed to take action on the proposed initiative.

Changing standards. The bar for filing a shareholder resolution is low. To qualify, the Securities and Exchange Commission requires investors to have held $2,000 worth of company stock for a year. But if you want to file, read the rules first (see SEC Staff Legal Bulletin No. 14I). Companies often petition the SEC to exclude proposals, and the agency can do so for a litany of reasons.

In December, SEC chairman Jay Clayton said the SEC would consider stricter rules for shareholders wishing to submit resolutions. But similar proposals have failed to gain traction in Congress, and experts say such changes aren’t likely before the 2020 presidential election.