When stocks and bonds wipe out, these funds can make money. But they need the right conditions from the Fed and other central banks. 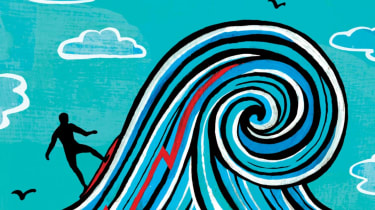 With the bull market looking haggard and the chances of making serious money in bonds looking slim, it might be the time to consider managed futures mutual funds. These funds trade futures contracts, which are promises to buy or sell a commodity, stock or other asset at a set price on a future date. Because managed futures funds can bet on prices rising or falling in any of the markets in which they deal, they have as much opportunity to make money in a down market as they do during good times. The funds shone during the 2007–09 bear market, when the average such fund returned a cumulative 36%, according to Morningstar. Over the same period, Standard & Poor’s 500-stock index plunged 55%.

Managed futures hedge funds have come under fire (and rightly so) for the astronomical fees they charge—typically including management fees, sales commissions and incentive fees that can claim 20% of a year’s profits. Although managed futures mutual funds aren’t cheap, with an average expense ratio of 1.99%, the funds we recommend below do not charge sales loads or performance fees, so they come with dramatically lower overall costs than their hedge-fund cousins.

Most managed futures mutual funds follow a momentum strategy, betting that certain current price trends will continue. All of the top funds are quantitatively driven—meaning that computers crunch price and volume data to determine which market trends are likely to persist, and when to buy and sell.

Recent years haven’t been kind to this subset of the burgeoning alternative mutual funds category. The average managed futures fund lost 0.5% annualized over the past five years (all returns are through January 28), and more than a dozen funds threw in the towel and liquidated during that period. Larry Kissko, a product specialist for Man AHL, a London-based firm that runs managed futures investments, says the outsize influence on markets of the Federal Reserve and other central banks has created a tough environment. “Managed futures funds are designed to do well when markets move naturally—driven by human behavior rather than government intervention,” Kissko says.

But the winds may have finally shifted in the funds’ favor. The Fed, which recently raised short-term interest rates for the first time in nine years, has begun to move toward a more normal monetary stance. Falling energy prices and a strengthening dollar over the past year and a half represent powerful trends that managed futures funds could exploit. Moreover, because these funds can make money on everything from rising rates to falling share prices, their potential returns aren’t hampered by a lack of opportunity in today’s markets—-unlike those of traditional stocks and bonds. If you are comfortable investing in alternatives, consider putting up to 5% of your long-term investment money into one or more of these funds.

A fine option is American Beacon AHL Managed Futures Strategy (symbol AHLPX). Although the fund only launched in August 2014, it has racked up a cumulative return of 17.2% since then, besting the category average by 6.8 percentage points. American Beacon farmed out management of this product to Man AHL, which manages $17.9 billion using quantitative strategies.The mutual fund follows models similar to those used in AHL’s hedge funds. The fund’s quantitative models look for trends that are likely to persist for two to three months, which is the fund’s typical holding period. It invests in futures contracts tied to stock indexes, bonds, currencies and assorted commodities. The fund charges 1.92% annually for expenses, so it’s hardly cheap. But unlike some other mutual funds linked to hedge funds, this fund comes with no hidden performance fees.

Another good choice among funds that employ momentum strategies is Guggenheim Managed Futures Strategy P (RYMFX). This fund tracked an index for the first six years of its life, but after a prolonged bout of underperformance, Guggenheim switched in 2013 to an actively managed approach. The firm hired John Marchelya, a hedge-fund industry veteran, to build in-house quantitative models. Performance since the strategy shift has been stronger; the fund has returned 4.1% annualized since then, compared with 2.7% annualized gains for the average managed futures mutual fund. The fund has profited from falling oil prices over the past year and a half, although in the past six months the choppy stock market has posed a challenge. The fund’s management team typically tweaks its models every six to nine months, aiming to get a leg up on the competition. The fund charges 1.68% annually.

For a different approach, consider 361 Managed Futures Strategy (AMFQX). This fund, which follows a so-called counter-trend strategy, invests only in futures contracts tied to three U.S. stock indexes: the S&P 500, the tech-heavy Nasdaq 100 and the Russell 2000, which tracks small-company stocks. In essence, the fund’s models aim to identify the stock market’s likely path over the short term. When the indexes dip below that projected path, the fund will bet on prices rising, and when prices shoot past expectations, it will bet on prices falling. The fund holds the average investment only two to three days.

In practice, this strategy means that the fund’s managers spend roughly 80% of their time sitting in cash and bonds, watching their models and waiting for the right time to strike. When the market is ripe, the fund will buy futures positions that simulate investing 100% of its assets in the stock market or going 100% short—that is, betting fully against the market. Making a large bet with futures typically requires only a small cash outlay, so the fund holds about 75% of its assets in a short-term fixed income portfolio managed by Federated Investors.

Because of its unique strategy, the fund should beat its peers during periods of stock-market choppiness, but it will likely lag during a persistent bull or bear market. Since its inception in 2011, the fund has returned 3.6% annualized, beating the category’s 0.3% gain over the same period. The fund, which currently has $797 million in assets, will likely close to new and existing investors when it reaches $1.5 billion in assets, says comanager Tom Florence. The fund charges 2.08% annually.

Two funds with solid returns since their launches offer investors a back door into well-known hedge funds. Equinox Campbell Strategy P (EBSPX), which has returned 7.0% annualized since its inception in 2013, aims to mimic the returns of a hedge fund run by Campbell & Co., a Baltimore-based managed futures firm. Altegris Futures Evolution Strategy N (EVONX), which has gained 10.6% annualized over the past three years, tracks the returns of hedge funds offered by two firms, Winton and ISAM.

However, both funds come with peculiar risks. Neither invests its assets directly with the hedge-fund firms. Rather, the Equinox fund uses a swap (a type of derivative) that mimics the performance of the Campbell hedge fund. The Altegris fund primarily uses a swap and a structured note (essentially an unsecured bond) to capture the returns of the two hedge funds it tracks. That means both funds face the risk that the banks that issue those instruments could default and not pay the promised returns (Deutsche Bank issues the swap agreement used by Equinox, and Barclays Bank creates the swap and note used by Altegris).

It also means that fund investors get hit with fees on top of fees because the swaps and the note come with fees of about 0.20% to 0.50%, which are not reflected in the funds’ expense ratios. Plus, the hedge-fund returns they tap are calculated after subtracting management fees of about 1% annually and performance fees of 20% of each hedge fund’s profits. Approach these two with caution.