Why You Should Invest in Health Care 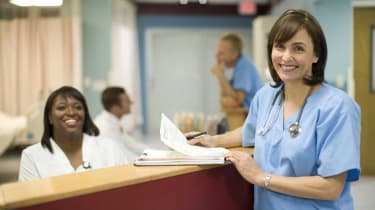 Health care stocks have the blues. Standard & Poor’s Health Care index has fallen 5.4% so far this year. The chief reason: political posturing about cutting the soaring costs of prescription medicines and of repealing Obamacare.

Maybe something concrete will come of this cheap talk on Capitol Hill and in the presidential campaign, though I highly doubt it. But what’s far more important is that the long-term tailwinds for the health care industry remain firmly in place—in fact, they’re gathering momentum.

But first, let’s take a quick look back. Over the past 15 years, the S&P Health Care index has returned an annualized 7%—an average of 1 percentage point per year better than Standard & Poor’s 500-stock index. The last year the health care sector trailed the S&P 500 was 2010. What’s more, during the 2007-09 bear market, health stocks lost 38%, compared with a 55% plunge for the S&P 500. (All returns are through March 22, unless otherwise noted.)

Health care tends to do well in both bull and bear markets, making it unique among broad sectors of the economy. There are good reasons for this, and they’re not complicated. For starters, demand for health care is virtually inelastic. By that, I mean that most people won’t markedly reduce their consumption of health care products and services no matter how much their prices rise.

With populations aging throughout the developed world—not just in the U.S.—demand for health care continues to grow. The reason is simple: Older people tend to get sick more often than younger people, and they tend to take longer to recover.

In the developing world, health care is just as big a growth story. As people rise from poverty and enter the middle class, one of the first things they purchase is health care. Whether China’s economy is growing at 7% annually or 3% annually, its middle class is growing and consuming more health care.

Another plus: Biotechnology and pharmaceutical firms are developing more and better treatments for many diseases at a remarkable pace. That trend shows no signs of slowing. In the past 20 years, previously unimaginable breakthroughs have been made against such killers as HIV/AIDS, heart disease, cancer and hepatitis C.

Given all that, you’d expect health care stocks to change hands at a huge premium to the market. But they don’t. The S&P health care index sells for a bit more than 15 times analysts’ earnings estimates for 2016, and the S&P 500 trades at 17 times estimates.

How to invest in health care

The fund, run by Wellington Management for Vanguard, is more diversified than most of its competitors. It currently has 46% of its assets in traditional drug companies, 15% in biotechnology, 12% in health insurance companies and 11% in medical devices. The rest of the holdings are spread among such things as distributors and health care facilities. All of that diversification tends to dampen volatility, making it easier for shareholders to hold the fund, a member of the Kiplinger 25, for the long term.

Biotech is the sexiest sector in health care, but it’s subject to periodic booms and busts. Fidelity Select Biotechnology (FBIOX), for instance, was the top-performing health care fund over the past five years, but it has plunged 28.1% so far this year.

Ed Owens, Vanguard Health Care’s manager from its inception in 1984, retired at the end of 2012. But Jean Hynes, 47, who took over from Owens, has worked for Wellington since she graduated from college in 1991, She started as analyst on Vanguard Health Care in 1995 and was promoted to its comanager in 2008.

Hynes has six full-time analysts, one of whom is a physician. She and her team are optimistic about the future. “They’re incredibly enthusiastic about the pipelines for new treatments,” says Dan Newhall, who leads a group responsible for monitoring all Vanguard funds. Hynes and her team say the Food and Drug Administration has accelerated approval of new drugs in recent years, Newhall reports. Hynes also shares my doubts that government will make any major changes in health care policy that harm investors in the sector.

The fund has a distinct value tilt, favoring stocks that trade at reasonable valuations. Hynes is patient, holding stocks an average of five years. She’s also conservative. Managed health care and health care equipment will never produce the blockbuster returns of biotech firms or small drugmakers. But during lousy markets, those boring holdings will cushion the losses.

As you would expect from a Vanguard fund, Health Care is cheap, charging 0.34% annually for expenses. The admiral share class (VGHAX) is even cheaper, at 0.29%, but it requires a $50,000 initial minimum (compared with $3,000 for the investor class).

My bottom line: We’re in a slow-growth world, one in which it’s getting harder for companies to boost sales and, hence, profits without resorting to cost-cutting and accounting gimmicks. Yet health care boasts several huge growth drivers. I’m not a big fan of sector funds. But this fund is too good to overlook. Vanguard Health Care almost certainly won’t be the top-performing fund over the next 30 years, but I bet it will still be a winner.