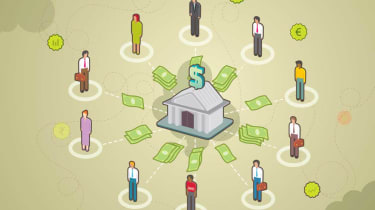 Mutual fund investors prospered in 2017 as the U.S. bull market charged into its ninth year with a stunning rally. Standard & Poor’s 500-stock index returned nearly 22%. What’s more stunning is that the U.S. rally paled in comparison with stock gains overseas. For the first time in a decade, the world’s developed economies grew at the same time, along with many emerging economies.

Investors who ventured into overseas funds were rewarded. Europe’s markets benefited from strength in manufacturing, low unemployment and rising corporate profits. In Japan, economic and regulatory reforms helped push stocks to a 26-year high. The MSCI EAFE index, which tracks stocks in developed markets, racked up a 25% gain in 2017, a sharp improvement from 2016’s puny 1% return. And the MSCI Emerging Markets index soared 37%, led by strong gains in Chile, China, India and Poland.

In the U.S., investor optimism hinged on hopes for lower corporate tax rates, which were signed into law by year-end. Yet small companies, which have typically paid taxes at higher effective rates (after accounting for deductions and other tax breaks) than their bigger brethren, were relative laggards. The Russell 2000 small-cap benchmark, up 15%, trailed the S&P 500 large-cap barometer by seven percentage points. Growth-oriented companies beat out those with shares selling at bargain prices. Technology was the top-performing market sector, followed by firms that explore for and process raw materials and companies that make nonessential consumer goods. Two sectors were in the red for the year: energy and telecommunication firms.

On the pages that follow, we show the top-performing mutual funds in 11 categories. The list includes only funds with reasonable minimum investment requirements and excludes leveraged and inverse index funds.

Shares of large U.S. companies rallied in 2017, led by fast-growing tech firms. Indeed, tech-focused funds dominate the one-, three- and five-year lists of winners. Morgan Stanley Institutional Growth Portfolio and T. Rowe Price Blue Chip Growth—a member of the Kiplinger 25, the list of our favorite no-load funds—benefited from big stakes in the FAANG stocks (Facebook, Amazon.com, Apple, Netflix and Alphabet). Primecap Odyssey Growth, another Kip 25 fund, is loaded with health care stocks, which claimed 31% of the fund’s assets at last report. Primecap managers look for firms with a catalyst, such as a new product or new executive, that will kick up earnings growth and drive the stock price higher over the next three to five years.

A solid but not great year.

Funds that invest in midsize companies fared best with tech and health care names in 2017. Baron Opportunity, which led the one-year winners, got a lift from fast-growing firms such as Guidewire Software, up 51%, and tech research and consulting firm Gartner, up 22%. Eventide Gilead follows a stock-picking process that starts with a religious and environmental screen. The fund won big last year with biotech stocks, including two focused on cancer treatments, Bluebird Bio and Loxo Oncology. Buffalo Discovery is a long-term winner, thanks to its pre-2012 focus on health care and technology. Now, with a more diversified portfolio, the fund hasn’t risen to the top in recent years, but it still beats the average returns of similar funds in this category.

Poised to pull ahead.

Small companies trailed their large-company counterparts in 2017, but they have a shot at taking the lead, given the boost they’ll likely get from the new tax law. Baron Discovery has posted strong returns in two consecutive years, outpacing 92% and 94% of its peers in 2016 and 2017. The fund’s managers focus on small firms with an average market value of $1.5 billion. T. Rowe Price QM U.S. Small-Cap Growth Equity, a Kip 25 fund, uses computer models to select some 300 stocks, based on profit growth and other measures. Conestoga Small Cap holds about 50 stocks hand-picked for their potential to boost earnings by at least 15% annually over the next three years. Neogen, a firm that makes food safety test kits, is a top holding.

Holding a mix of stocks and bonds, the big winners in hybrid funds for 2017 kept as much as 85% of their assets in stocks. Vanguard Wellington, a Kip 25 fund, has failed to crack the winner’s circle in recent years largely because of its moderate asset mix: 65% stocks and 35% bonds. But its 10-year record reflects returns that have beaten similar funds in eight of the past 10 calendar years. (Note that if you’re new to the fund, you must be a Vanguard customer to buy shares.) Fidelity’s Freedom target-date funds, which shift to a more conservative asset mix over time, now shine after an overhaul. Four funds with distant target years, from Freedom 2040 to Freedom 2055, were buoyed by stock funds run by top Fidelity managers Will Danoff, Joel Tillinghast and Steven Wymer.

Back with a vengeance.

Focusing on shares of fast-growing companies paid off in this category in 2017. Sizzling Chinese internet stocks, such as Alibaba Group and Tencent Holdings, helped Morgan Stanley International Opportunity and Vanguard International Growth leap into the winner’s circle. Kip 25 member Oakmark International returned 30% over the past year, despite holding just a smattering of stocks in emerging markets, which outpaced shares in developed countries. The fund’s managers look for shares of relatively inexpensive, high-quality firms, investing in automakers such as Daimler and Toyota Motor and European banks such as Credit Suisse and BNP Paribas. The formula works: Over the past 10 years, the fund beat 99% of its rivals.

Cashing in on growth.

A banner year for small and midsize foreign stocks smoothed the way for funds in this category. The standouts focused on fast-growing companies. Manning & Napier Rainier International Discovery hit the jackpot with Techtronic Industries, a Hong Kong–based power toolmaker that surged more than 85% in 2017. T. Rowe Price International Discovery spreads its bets, holding more than 220 stocks. Manager Justin Thomson sticks primarily with stocks that average $2.6 billion in market value. Developed-market stocks accounted for 81% of the fund at last report, but some of its biggest winners lately have been in emerging markets, including stocks such as China Lodging Group and Sino Biopharmaceutical.

Foreign markets sprinted past the S&P 500 in 2017, helping many global funds, which invest in foreign and domestic stocks, beat their pure-U.S. counterparts. Baron Global Advantage, which recently held about 45% of its assets in foreign stocks, prospered by riding the tech wave with holdings such as Alibaba, Facebook and Google’s parent, Alphabet. Evermore Global Value has found long-term success in the shares of small and midsize companies, fishing for inexpensive stocks with an average market value of $2.6 billion. The fund’s managers look for companies that are far off most radar screens, and recently held 78% of the fund’s assets in non-U.S. stocks, including Monaco-based shipping firm Scorpio Bulkers and South Korean chipmaker MagnaChip Semiconductor.

A perfectly mixed cocktail of robust earnings growth, higher commodity prices and strengthening currencies made emerging-markets stocks one of the best-performing asset classes in 2017. Gains might not continue at the same breakneck pace, but the good times aren’t over yet. Baron Emerging Markets, a Kip 25 fund, focuses on stocks that stand to gain from long-term growth trends, such as mobile e-commerce in China and the growing class of wealthy individuals in need of financial services in India. T. Rowe Price Emerging Markets targets stocks in China, Taiwan and India, such as Chinese internet firm Tencent Holdings, Taiwan Semiconductor Manufacturing, and Housing Development Finance, a mortgage provider in India.

Focusing on a single foreign country can pack a big punch if you choose wisely. China’s stock market—up 54% in 2017—was a bet that paid off, especially for funds that emphasized surging technology stocks. Matthews China—a fund we like for its relatively low fees and solid long-term performance—held more than 30% of its assets in tech stocks at last report. Wasatch Emerging India capitalized on economic and tax reforms that are fueling a surge of growth in India’s economy. Japan’s stock market rallied sharply late in 2017, pushing the Nikkei 225 index to its highest close since 1991. Investors looking to benefit from the continued revival of Japan’s economy, which is expected to grow 1.8% in 2018, should consider Hennessy Japan Small Cap Fund.

The way to beat the market in 2017 was to load up on technology stocks. That has been the winning ticket for years. At Fidelity Select Technology, manager Charlie Chai focuses on firms that should prosper from changes in technology over the next three to five years. The fund owns graphics-chip maker Nvidia, which is expanding into chips for self-driving cars. Putnam Global Technology heads abroad to find bargains and holds stocks in Chinese internet firms, such as Alibaba Group Holding and Tencent Holdings. Brokerage customers at Fidelity and Schwab can buy the fund without a sales charge. Health care stocks have been solid performers for years. Fidelity Select Biotechnology has crushed 93% of its rivals over the past decade. Its top holding, Amgen, has been in the fund since 1998.

Haven’t kept up with the bull.

The hodgepodge of funds known as alternatives may invest in anything from commodities to currencies. Many also use hedging techniques that are designed to limit losses in a downturn but that can crimp bull market gains. Nonetheless, several long-short funds—which can bet on whether stocks will go up or head in the other direction—produced double-digit gains in 2017. AC Alternatives Disciplined Long Short and Schwab Hedged Equity are funds worth considering if you want protection against a downturn and, in exchange, are willing to forgo some gains in a rising market. BlackRock Event Driven Equity looks for a catalyst, such as a merger or corporate restructuring, that can get a stock moving. Schwab and Fidelity waive the fund’s sales charge for their customers.