Trade-War Threats Weigh on the Market

A tilt toward domestic-focused stocks makes sense for most investors. 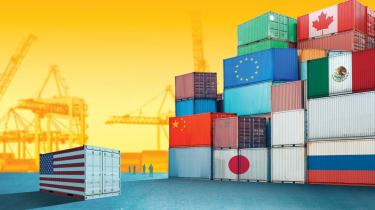 Is a trade war about to bring out the worst in this stock market? So far, the strong economy and robust corporate earnings have been enough for the market to withstand a protectionist onslaught. But investors should expect the volatility to continue, and new market highs could be on hold for now.

The U.S. is currently at odds with six of its top seven export markets, accounting for more than half of American exports. The Trump administration has imposed tariffs on $50 billion of Chinese imports, has begun the tariff process for an additional $200 billion of Chinese goods and has threatened tariffs on even more—to the tune of some $500 billion in total.China could retaliate by imposing more tariffs of its own, as well as increasing scrutiny and regulation of American businesses seeking to operate in China and encouraging boycotts of U.S. goods. Europe, Canada and Mexico are part of the tariff wars, too. And U.S. auto imports are under separate threat. So far, a total of $300 billion worth of imports to the U.S. and $100 billion in U.S. exports are slated for higher tariffs, according to Moody’s Analytics.

In the end, it’s most likely that only $100 billion of U.S. imports and exports will ultimately face higher tariffs in the global standoff, says Moody’s. In this scenario, to which Moody’s assigns a 60% probability, U.S. gross domestic product would be reduced by about 0.1 percentage point at the peak of the trade confron­tation, in mid 2019. Cushioning that impact is the massive fiscal stimulus of tax cuts and spending increases, which are expected to add 0.4 percentage point to GDP growth this year and a like amount in 2019, Moody’s figures.

Nonetheless, trade worries have intermittently weighed on the stock market and will continue to do so. Threat of a global trade war “will likely lead to elevated volatility, if not a renewed threat to the market’s attempt to set a new high,” says CFRA chief strategist Sam Stovall. According to the economists at Moody’s, “brinkmanship seems set to continue until global financial markets crack.” In a survey of global fund managers in July by Bank of America Merrill Lynch, 60% of respondents said that a trade war is the biggest threat to financial markets.

What to Do Now

Take stock of your portfolio, but don’t make wholesale trade-related shifts, says Jeff Mills, co-chief investment strategist at PNC Financial Services Group. That said, a tilt toward stocks with a domestic focus, which are somewhat insulated from international trade tensions, makes sense now. So far this year (through July 3), a basket of stocks compiled by Goldman Sachs representing companies that derive 100% of revenues in the U.S. is up 5%, compared with a 1% gain for firms with a preponderance of international sales.

Consider the shares of small companies, which tend to derive a higher percentage of revenues in the U.S. than their blue-chip counterparts. Mills has been largely avoiding emerging-markets stocks, which will bear the brunt of any trade-related global economic slowdown.