The Psychology of a Market Bubble

The best defense against a bubble is a well-diversified portfolio. That helps ensure that losses in one sector or asset class won’t sink you overall. 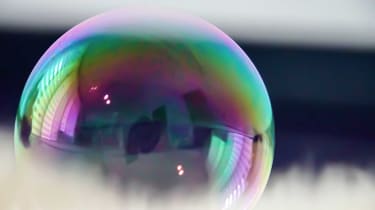 In the ninth year of an indefatigable bull market—which for now remains undeterred in the face of political bickering, congressional investigations, neo-Nazi marches, devastating hur­ricanes and the threat of nuclear war—investors are starting to worry about something else: a speculative bubble.

Are financial assets on a rocket to nowhere? From the November presidential election through August, Standard & Poor’s 500-stock index has returned 18%, far more than an average year’s worth of gains. The so-called FAANG stocks—Facebook (symbol FB), Amazon.com (AMZN), Apple (AAPL), Netflix (NFLX) and Google parent Alphabet (GOOGL)—have rallied even more, with Apple returning 50%, for ex­ample, and Facebook up 38%. Outside the stock market, cryptocurrencies are on a ridiculous tear. Bitcoin, the digital currency that circulates from computer to computer independent of a central bank, is up 675% since January.

Everyone knows how bubbles wind up. We’ve seen the boom-bust scenario time and again, going back to the tulip mania in 17th-century Holland. More recently, we withstood the tech wreck of 2000, which decimated dot-com stocks, and the real estate bubble (and related financial esoterica) that collapsed in 2007, pulling the S&P 500 down 58% and ushering in the Great Recession.

A good story. The exact definition of a bubble depends on whom you ask. But it’s safe to say bubbles are more than inflated prices alone. They’re marked by the narratives that circulate about them, says Robert Shiller, the Yale professor and Nobel laureate whose book Irrational Exuberance is in its third edition.

Tales of fortunes being made, often with a new-era twist, are accepted as justification for price increases and a reason to expect more, drawing ever more investors in, he says. Our human tendency to compare ourselves to others makes us vulnerable. “Attention to others’ successes, and perhaps feeling left out, is part of the emotional ambience of a bubble,” says Shiller.

Bitcoin, with no intrinsic value of its own, fits Shiller’s definition to a T. “There are lots of cryptocurrencies, but none of them has as good a story,” he says. There’s a mythological inventor whom no one can find, lending an air of mystery. The freedom from government control appeals to independent-minded people. And the blockchain technology (the virtual ledger of digital currencies) “sounds so clever and so modern,” he says.

Stocks? They’re bubbly, too, and the narrative stoking them is the Trump revolution and its promise of American greatness and entrepreneurial success, says Shiller. I didn’t ask the economist about his politics, and I don’t think it plays into his thinking here. But he’s certain of this: “Trump has an ear for psychology,” says Shiller. “He knows the importance of a story.”

Timing is tricky. Bubbles can go on for a long time, and it’s hard to know when they’ll end. For what it’s worth, Shiller has not appreciably lightened up on his stock investments (although he has moved more overseas, given high valuations in the U.S.).

Finance professor Meir Statman, at Santa Clara University, believes it’s impossible to recognize a bubble when you’re in one. “People can see bubbles in hindsight; the problem is we don’t see them when it matters,” he says.

The best defense against a bubble is a diversified portfolio, both experts agree. That helps ensure that losses in one sector or asset class won’t sink you overall. The advice may sound banal, says Statman, but it works. Just as watching your weight, exercising and not smoking are dull but dependable ways to stay healthy, diversifying your investments in accordance with your risk tolerance and stage in life will keep your portfolio from taking a turn for the worse.

The Nasdaq cleared its September highs Wednesday despite a second straight week of rising unemployment claims that slowed the other major indices.
The 10 Best Books for Beginning Investors

The 10 Best Books for Beginning Investors

Do you want to start building your wealth? Consult this short list of the best books for beginning investors before you embark on your journey.
Stock Market Today 11/2/20: Markets Climb on Election Cycle’s Penultimate Day