Skip to headerSkip to main contentSkip to footer
Advertisement
Investing

A Real Estate Fund With Focus

Real estate investment trusts stumbled badly in 2008, surged the next two years and held up better than most stock groups in 2011 (through December 1, the MSCI U.S. REIT index gained 2.6%). And because REITs must pay out essentially all of their profits to shareholders, the stocks are generally a fine source of income in today's low-yield world.

One of the more compelling REIT-oriented exchange-traded funds is iShares Cohen & Steers Realty Majors Index (symbol ICF). The ETF follows an index of the same name, a proprietary benchmark of the 30 most actively traded U.S. REITs. The index is far more concentrated than others of its kind. For instance, Vanguard REIT ETF (VNQ) holds 106 stocks. But iShares managers believe that the Cohen & Steers index -- and its focus on large-capitalization REITs -- is poised to benefit from future consolidation in the U.S. real estate industry. In fact, two industrial-property REITs that had been in the index, ProLogis and AMB Property, merged in 2011 (Cohen & Steers added General Growth Properties, a REIT that owns shopping malls, to replace AMB).

The ETF does a good job of tracking its index: In the year that ended December 1, the ETF lagged the Cohen & Steers index by a mere 0.16 percentage point. "We're tracking the index spot on" when you add back the fund's annual expenses, says Rene Casis, a portfolio manager at BlackRock, which owns iShares ETFs. 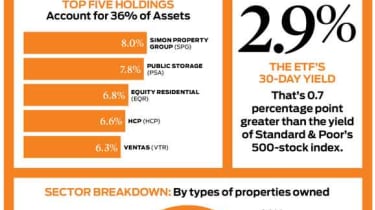