The leading food distributor has raised its cash payout every year since 1976, and now an activist investor is clamoring for even more. 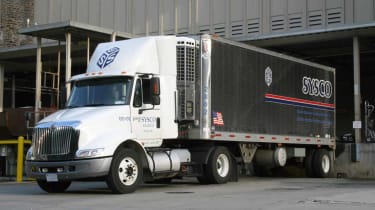 Food service giant Sysco (symbol SYY, $41.38) has been plodding along without much success of late. The Houston-based company’s profits peaked in the fiscal year that ended in June 2011, and it recently dropped a bid to buy its largest rival, US Foods, after a federal judge blocked the proposed merger as anti-competitive.

But things could be turning around for Sysco, the largest food service business in the U.S., with more than $48 billion in annual revenue. For starters, activist investor Nelzon Peltz has climbed on board. Peltz’s firm, Trian Holdings, disclosed a 7.1% stake in Sysco on August 14, and he’s likely to aggressively push the firm to bolster profits and return more capital to shareholders via stock buybacks or dividends. Peltz may also lobby for a seat on Sysco’s board of directors to press his case. The stock jumped 7.4% on August 14.

For now, Sysco’s growth plan involves buying smaller food distributors, making inroads into new geographic markets, and using software and other technologies to make deliveries more efficient. Sysco, which delivers food to restaurants, hotels, schools and other institutions, is also trying to boost sales to local businesses, which tend to be more profitable than sales to restaurant chains (those big brands account for about 14% of annual sales).

If that’s not enough, the company aims to prop up earnings per share by finding additional cost savings and spending $3 billion to buy back stock over the next two years. Some analysts say Sysco is still a show-me stock. The company’s previous cost-cutting plan generated more than $750 million in savings in recent years, but it didn’t produce higher profits, says Deutsche Bank analyst Karen Short. For now, it’s unclear how much of Sysco’s new plan will lift earnings or be “swallowed by industry headwinds,” such as weak consumer spending, food price deflation and potentially higher energy costs down the road.

Patience with the stock should pay off, though. For starters, there’s the quarterly dividend, currently $0.30 per share. Sysco pays out about 65% of earnings to shareholders, a relatively high percentage of its profits. But it hasn’t missed a payment since 1972, and it has raised its cash dividend annually since 1976, including during the lean years of the 2007-09 recession.

At its August 14 closing price, the stock yields 2.9%. Assuming earnings can climb 5% a year, on average, the stock should deliver a total return of roughly 8%. That isn’t a tall order, considering that Wall Street expects profits to rise 7%, to $1.97 per share, in the fiscal year that ends in June 2016. At about 21 times estimated earnings for the next four quarters, Sysco trades at a slightly higher price-earnings ratio than the five-year average P/E of 18. But if any of its expansion plans pay off, profit growth is likely to accelerate, potentially pushing up the stock’s P/E, too.

Yet with Peltz now lobbying for changes, the stock could quickly move higher. And even without his involvement, it shouldn’t take much for Sysco shares to serve up tasty gains.

These 20 high-quality dividend stocks yield roughly 4% or higher and should grow their payouts even more -- a powerful 1-2 combo for retirement income…
Closing Bell 7/9/20: Another Split Market as Jobs Concerns Grow