Energy companies are especially vulnerable, but four of our picks come from outside of that troubled sector. 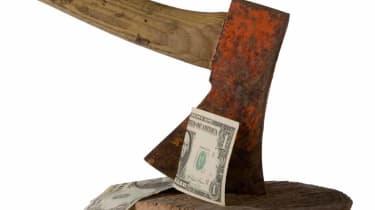 When investors think of dividends, they often think “safety.” Checks that arrive like clockwork come to mind. But a recent round of dividend cuts has given some income-seekers a rude awakening. Among the rudest: Kinder Morgan (symbol KMI), the energy pipeline giant, slashed its dividend 75% in early December, cutting the quarterly payout from 51 cents a share to 12.5 cents. A day later, Freeport McMoRan (FCX), a copper and gold producer with an ill-timed expansion into oil and gas production in 2013, suspended its dividend.

Dividend cuts are still rare. Through mid December, 337 companies in Standard & Poor’s 500-stock index increased their payouts this year. But the average increase is running at 13%, below the 18% average increase in 2014 and 20% in 2013. And 15 companies in the S&P decreased their dividends, while three, including the aforementioned Freeport, suspended them altogether, up from just eight cuts and no suspensions in 2014. Companies in the struggling energy sector cut dividends by $6.2 billion. For context, consider that from 2010 through 2014, cuts in the energy sector totaled $1.3 billion.

How to spot a risky dividend

Ironically, an indication that a cut is imminent is a spiking yield, which is a stock’s annual dividend rate divided by its share price. What’s “high” in terms of yield depends on the industry; 4% for a utility stock is fine, but it invites skepticism in a faster-growing tech company or a more-economy-sensitive industrial company, for instance. But if a stock that usually yields 4% all of a sudden yields 6%, and the cause of that burgeoning yield is a falling share price, it could be an indication that Wall Street doesn’t believe that the dividend is sustainable and that a reduction is in the offing.

It’s best to be on the lookout for warning signs of a dividend cut early on, because by the time it’s finally announced, much of the damage to a stock has already been done. Keep a close eye on a stock’s payout ratio, or the amount of a company’s earnings paid out in dividends. The average payout ratio for S&P 500 stocks is currently 37%. Again, what constitutes a high ratio depends on the business. Tobacco stocks can pay out the majority of their earnings in dividends because a long-term decline in demand for their product means they’re not spending a lot on factories and equipment, yet the business remains profitable and generates tons of cash.

But in general, anything above 70% to 75% should raise eyebrows—or at least initiate some research. Get to know the company’s cash flow situation. While earnings can be subject to various adjustments, a positive free cash flow means a company has invested what it needs to maintain its business and has money left over to spend on dividends.

Look at how much debt the company is carrying and whether it needs to tap capital markets to meet its commitments. Companies forced to choose between protecting their credit rating and protecting their dividend will cut the payout every time. “That’s what forced the situation for Kinder,” says Josh Peters, a stock strategist and editor of Morningstar Dividend Investor.

Whose dividend is next on the chopping block? Reality Shares Advisors, a sponsor of exchange-traded funds, ranks dividend-paying stocks based on historic dividend trends, cash flow, earnings, buybacks and other data, with an eye toward determining the prospects for dividend hikes or cuts. Stocks with the company’s lowest rating have about a 40% chance of cutting their dividends within the next 12 months. (You can find the ratings at www.realitysharesadvisors.com/divcon).

Whether a dividend cut is a reason to sell depends on why you own the stock in the first place. What a bargain-hunter sees as a smart fiscal move to deal with a temporary setback could be a deal-killer for an income investor. But we think the five stocks below, many of which land in Reality Shares’ bottom two dividend buckets, merit watching. Share prices and yields are as of December 28.

Mattel’s payout ratio for the 12 months that ended September 30 was a whopping 171%. Analysts’ estimates for both dividends and earnings imply a 145% payout ratio for the 2015 calendar year and 114% for 2016. Meanwhile, cash on Mattel’s balance sheet has steadily declined from $1.3 billion at the end of 2012 to $290 million at the end of the third quarter of 2015. The company’s toy lineup is in desperate need of a hit. “Depending on how Mattel did this holiday season, 2016 may see the introduction of ‘Dividend Cutter Barbie,’” quip the analysts at Reality Shares.

The country’s third-largest telecommunications company has been trying to move from last century’s landlines to this century’s cloud, but the company lost four senior cloud executives in 2015, three of them in the past few weeks. For the 12-month period that ended September 30, the company paid out 168% of what it earned. “They’ve been paying out well in excess of what they’re taking in for many quarters,” says Eric Ervin, Reality Shares’ CEO. “In that case, the writing’s on the wall.” CenturyLink cut its dividend by 26% in 2013.

Yes, the yield for this gold-producing behemoth is already minuscule. But it should be even lower; in fact, it’s supposed to be nothing. That’s because Newmont’s dividend policy is explicitly tied to the price of gold—in theory, when gold sells for less than $1,200 an ounce, the company shouldn’t be paying a dividend, although declaring one is at the discretion of the board of directors. The average price for the metal did breach the $1,200-an-ounce threshold in the third quarter. The company maintained its quarterly payout of 0.025 cent a share, “but that can’t go on forever,” says Ervin, especially with gold selling today at $1,070 an ounce.

The heavy-equipment manufacturer rarely sports a dividend yield this high. Only once in the past 16 years has the average annual yield climbed above 3%. The company is reeling from a global industrial slowdown, and analysts expect an 8% slump in sales and a 22% drop in earnings in 2016. Cost-cutting has resulted in thousands of layoffs. Yet the company has continued to raise its dividend aggressively, from an annual rate of $1.84 a share in 2012 to the current rate of $3.08 per share, even as its customers in the energy and mining industries have struggled. “That could come back to hurt CAT,” says Peters.

Kinder Morgan’s dividend cut has paved the way for other companies in the business of processing, storing, transporting and marketing oil and natural gas. A toxic combination of high debt and sinking commodity prices will put pressure on Targa’s dividend for years, says analyst John Edwards of Credit Suisse. He recently downgraded the stock to “underperform” (translation: sell), despite a one-year price target of $36 a share, which is 38% above the current price. But Edwards’s previous target price was $79. “We see no way out of the woods for TRGP without a substantial dividend cut,” he says.

These 20 high-quality dividend stocks yield roughly 4% or higher and should grow their payouts even more -- a powerful 1-2 combo for retirement income…
Closing Bell 7/9/20: Another Split Market as Jobs Concerns Grow