Hundreds of widely held stocks are priced so low that their quotes seem like misprints. Because of that, many of these stocks are sporting unusually lavish dividend yields. Based on its October 17 closing price of $16.91, drug giant Pfizer (symbol PFE) yields a utility-like 7.6%. AT&T (T) yields 6.3%. Verizon (VZ) pays 6.8%, General Electric (GE) 6.3% and so on. Intel (INTC) yields 3.6%, huge for a technology stock.

All of the names listed above are members of the Dow Jones industrial average. Less-well-known companies offer dividend surprises as well. Steel Dynamics (STLD), a steel producer, yields 4.5% and Garmin (GRMN), the maker of GPS systems, pays 3.1%. Before 2008, both these stocks had performed magnificently this decade. This year they've been crushed.

Current tax law enhances the attractiveness of today's high dividend yields. At least through the end of 2010, the federal income-tax rate on qualified dividends-and dividends from all the companies in this article are considered qualified-remains just 15%.

But you need to take extra care when buying stocks with inflated yields. The big risk that you may be investing in a company that is seriously ill. An ultra-high-yield may be the market's way of saying that because of one problem or another, the underlying company may soon have to trim or even discontinue the dividend. That has certainly been true this year of big financial institutions, such as Bank of America (BAC) and Citigroup (C), both of which have cut their dividends. And because of the terms of the Treasury Department's plan to infuse big banks with capital from taxpayers, it's unlikely that the banks will be raising dividends anytime soon.

My suggestion instead is to troll Standard & Poor's list of dividend "aristocrats," companies that have raised their dividends for at least 25 consecutive years. But make sure you cross off banks and insurance companies; they're just too chancy. I'd also consider electric utilities even if they are not on the S&P list.

Focus on companies with low debt and high free cash flow. You want a payout ratio (dividends divided by earnings per share) of below 75% for utilities and below 50% (40% is better) for anything else. Stick with established powerhouses in industries that are unlikely to be under severe pressure in a recession. It's an especially good sign if a company increased its dividend in 2008.

Start with AT&T, a big deal now in wireless telephones. Because cell phones are no longer a mere luxury-some people have abandoned landline phones and use only a wireless device-I'd consider AT&T a utility. The company pays a 40-cent quarterly dividend, which it raised from 36 cents early in 2008. The $1.60 annual dividend is 55% of AT&T's estimated 2008 earnings of $2.93 a share and a bit more than half of 2009's mean forecast of $3.13 per share. But that's okay. We're not talking about a retailer or manufacturer of stuff no one really needs to buy immediately. AT&T has debt and generates substantial free cash flow. The stock, which closed October 17 at $25.29, 41% off its 52-week high, isn't a sure thing, but that 6.3% yield sure is enticing.

So is Pfizer. Over both the past five and ten years, the company has boosted its payout at annualized rate of 17%, according to Value Line. The dividend, at the current annual rate of $1.28 per share, represents a bit more than half of estimated 2009 earnings of $2.50 a share. Pfizer sits on more than $26 billion in cash and has little debt (it's one of just a handful of industrial companies with a triple-A credit rating).

Yes, it's hard to find a more frustrating blue chip -- Pfizer's stock has been trending down steadily since late 1999. But if you want a generous dividend check, 7.6% gets your attention. That's more than you get from most real estate investment trusts, electric utilities and high-grade corporate bonds. In fact, Pfizer's ten-year bonds yield just 5.5%.

Here are eight other high dividend-yielding stocks, all but two of them S&P aristocrats, that also pass my other tests. The payout ratios weigh the current annualized dividend rate against average analysts' earnings estimates for 2009. If the world economy enters a severe recession, analysts will reduce earnings estimates and investors are likely to beat these shares down even further. But barring economic catastrophe, the companies on this list should be able to maintain their dividend rates. For now, the payments are well-covered by even conservative guesses of next year's earnings. Each stock is well off its 52-week high (figures are as of the October 17 close):

Check out our earnings calendar for the upcoming week, as well as our previews of the more noteworthy reports.
25 Dividend Stocks the Analysts Love the Most 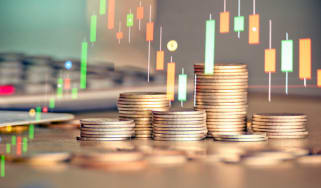 25 Dividend Stocks the Analysts Love the Most

These blue-chip dividend stocks with yields of at least 3% are among the favorite stock picks of Wall Street's analyst community at the moment.