7 Banks and Brokers That Pay You to Open Accounts

Fidelity, Chase, E*Trade and others are offering cash incentives to get customers to transfer assets. 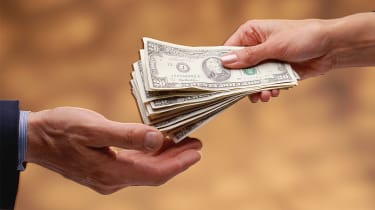 If you want a great return on your money, forget about the interest rate and look for accounts that offer cash bonuses. In an effort to poach customers from their competitors at a time when interest rates are excruciatingly low, banks and brokers are offering cash giveaways. Although these bonus payments won't make you rich, they offer a certain return in an environment where a risk-free yield is otherwise elusive.

Among those that have gotten into the act is Fidelity Investments, which recently launched an Individual Retirement Account matching program. If you transfer assets in a traditional, Roth or rollover IRA invested with another company to Fidelity, the Boston-based mutual fund giant will match a portion of your subsequent contributions for three consecutive years.

How much can you get? That depends on how much you deposit and add to the account. Fidelity's match is only on new contributions—after your initial transfer—and the match ranges from 1% to 10% of the new contribution, depending on the amount of the initial deposit. If you transfer the minimum amount of $10,000, your match is 1%. To get the top 10% match, you must transfer at least $500,000 to Fidelity. The government limits annual IRA contributions to $5,500 ($6,500 for those over age 50), so Fidelity's match would range from $55 to $650 a year.

Both TD Ameritrade and E*Trade offer deals that are based on the amount of money you shift into new accounts. If you transfer $250,000 or more, both E*Trade and TD Ameritrade will pay $600 and provide a number of commission-free trades.

Motif Investing, an online brokerage, is offering a similar deal. Those who transfer at least $5,000 to a Motif IRA before the end of 2015 can get a one-time bonus of $150. However, neither Motif nor Fidelity pay cash if you're transferring assets from a company-sponsored retirement plan. You need to bring in money from a competitor. (TD Ameritrade and E*Trade make no such demand.)

And brokers are not the only ones trying to poach IRAs. Ally Bank is paying bounties of $100 to $500 for IRAs transferred from other institutions, depending on the size of the deposit. Ally's program is set to expire at the end of May.

Don't need another IRA? You can get a bonus just for moving your checking account. Chase Bank, for instance, has been offering promotions in select regions that promise bonus payments of as much as $300 to people who open checking accounts funded with direct deposits from an employer or another account that's not your own. You don't have to maintain a minimum balance to get the bonus, but if you want the checking account to remain fee-free, you need to either direct-deposit at least $500 a month or maintain a daily minimum balance of $1,500. Assuming you leave just the $1,500 minimum in the account, the $300 bonus is the equivalent of earning a whopping 20% on your money. The bad news? To take advantage of the Chase promotion, you have to get a postcard in the mail and take the coupon to a Chase office.

Chase's deal is far from unique. Open an "extra20" checking account at Santander Bank and follow the program rules and you'll get $20 a month indefinitely (see more details on the Santander offer).

What are all the bonuses about? They're a way to get customers to open "sticky" accounts—financial industry jargon for business that is impractical or hard to move to another firm. That gives the financial institution time to hook you on its service and win over more of your business, says Mark Schwanhausser, research analyst at Javelin Strategy & Research, a consulting firm in Pleasanton, Calif. "They want a chance to impress you," he says. "It's not a bet on an immediate profit. It's a bet on a long-term relationship."