Buffeted by huge rate hikes, most policyholders are choosing to trim their coverage.

Ken Witty, a retired television news producer in New York City, thought he had done everything right. After spending a career in financial news, Witty, 75, understood how the unpredictable costs of long-term care could devastate his retirement plan, so he bought a long-term-care insurance policy from Genworth when he was 65. For coverage that would provide a $250 daily benefit for three years and grow by 5% per year, he paid about $3,600 a year.

But earlier this year, he received a letter from Genworth notifying him that his premiums would jump to more than $5,800 annually—more than 60% higher—unless he made major changes to his coverage. Witty says he could understand a modest increase, "but not this sort of rate hike." He chose to reduce future adjustments from 5% to 3.5%, which cut his rate hike in half. For the time being, at least, he'll pay $4,780 per year.

Many long-term-care policyholders are facing the same tough decision: Pay a steep rate increase, cut back on coverage or let the policy lapse and lose the benefits they were counting on. Almost all long-term-care insurance companies have raised customers' premiums years after they bought their policies, with average increases of 50% to 60% over the past decade, says Kevin McCarty, the former commissioner of the Florida Office of Insurance Regulation. More rate hikes are on the way in several states when the policies renew. "When people bought this product, they bought it on the assumption that the price would be stable," says McCarty. "But the assumptions the companies made turned out to be wrong."

Insurers underestimated the number and length of claims, and they assumed that more people would drop their policies before they'd have to pay out. But people are now living longer with chronic diseases such as Alzheimer's. "Advances in medicine are changing the insurance companies’ experience, and they have to constantly incorporate that into pricing," says Jan Graeber, chief life and health insurance actuary for the Texas Department of Insurance. Plus, insurers did not anticipate low interest rates that would stunt their own investment returns, which they depend on to pay future claims.

Policyholders usually end up on the hook. Premium increases vary by company, age, policy version, coverage specifics and the state where you bought the policy. Policies with lifetime benefits and 5% compound inflation adjustment, which have ended up being extraordinarily expensive for insurers, tend to have the biggest rate hikes.

State insurance regulators must approve the rate increases, and they have to weigh consumer protection against each company's financial stability. "Most of the time, the rate increase as asked for isn't approved," says McCarty. "But if a company is insolvent, it can't pay claims." Regulators may deny insurers' requests to raise rates altogether, or require them to spread out the increase over several years, or approve a smaller amount than requested. And you can usually choose among several options to lessen an increase.

Policyholders feel trapped because they don't want to lose the coverage they've been paying for over many years—especially as they get closer to the age at which they may need care. And it doesn't make sense to drop the coverage and buy a new policy; because you're older and may have health issues, you'll pay more. Plus, new policies are a lot more expensive these days, even for younger, healthy buyers.

Mike Ashley, president of an independent insurance agency, Senior Benefits Consultants, in Prairie Village, Kan., bought a Genworth policy 17 years ago, when he was 52. He paid $879 per year for a $70 daily benefit, 50-day waiting period, 5% compound inflation protection and lifetime benefits. He has received two rate increases since then of 38% each, boosting his premiums to $1,547 per year. But today, a 52-year-old man would pay $2,944 per year for a comparable policy with only a five-year benefit period (insurers have stopped selling new policies with lifetime benefits).

The median cost of a private room in a nursing home is $253 per day (more than $92,000 per year), according to the 2016 Genworth Cost of Care study, but you could pay $350 a day or more in high-cost areas. Assisted living, which has become an increasingly popular option, has a median cost of $3,628 per month (more than $43,500 per year). And you could pay more than $40,000 per year for a home health aide to come to your house for eight hours per day. (You can find costs in your area at www.genworth.com/costofcare.)

For most people, the answer is not to cover the entire cost with long-term-care insurance, but rather to calculate how much of the cost they could handle with retirement income and savings, then look for ways to fill any gap. Chris Draughon, a certified financial planner in St. Augustine, Fla., helps his clients walk through the calculations, looking at the cost of care in their area and figuring out how much they could afford. "We talk about how much risk they want to shoulder themselves and how much they want to transfer to an insurance company," says Draughon.

Sheryl and John Maguire, of Kansas City, Kan., retired last year, when they were both 62. They worked with their financial planner to figure out how they could pay for care. "It's like a puzzle," says Sheryl. They have enough money from their pensions, Social Security and savings to cover some of the potential costs, but they wanted insurance to help pay for care at home if needed and protect some assets for their children.

They're paying about $4,050 per year total for policies that pay each of them up to $3,000 per month for four years, with the benefits increasing by 3% per year. They also have shared benefits (an option that typically increases premiums by about 12%), which lets them share the eight-year benefit period between them.

Because the average long-term-care claim is just less than three years, most people buy policies with a three- or four-year benefit period, 3% compound inflation protection and a 90-day waiting period before benefits kick in. Compare policy nuances, such as how the insurer calculates the waiting period. The best policies start the clock ticking as soon as you need help with two activities of daily living (such as bathing and dressing) or are certified to have cognitive impairment. But others count only those days on which you receive care. If you need home care just a few days a week, a policy that counts only "service days" can take several more months to pay out.

The Maguires chose a policy from LifeSecure primarily because of its generous home-care benefits. Their policy lets them use up to 50% of the home-care benefit to pay for care by family members or neighbors, whereas some insurers require 100% of home care to be provided by licensed providers who are hired through an agency. "That gave us a lot of freedom to hire whoever we want," Sheryl says.

Premiums can vary significantly by insurer, and each insurer has its own sweet spots. MassMutual, for example, tends to have competitive rates for single women in several states, says Dian Haider, a long-term-care specialist for Ryan Insurance Strategy Consultants, in Greenwood Village, Colo. Otherwise, most companies charge 50% more for single women than for single men.

Insurers can also charge very different rates based on your health. A few now charge more if someone in your family had cognitive impairment before age 70. Some reject applicants with diabetes, but others may issue a policy at a standard rate (not the lowest-cost preferred rate) if you’ve had diabetes for fewer than 20 years and control it with certain levels of insulin.

Coverage for cancer survivors can vary widely, too. "It depends on the stage, the type of cancer, the type of treatment and how long ago it took place," says Haider. She asks a lot of medical questions before identifying which insurers are likely to offer the best rates. (You can find a long-term-care specialist at www.aaltci.org.)

Some advisers have turned their back on traditional long-term-care insurance. Draughon prefers policies that combine long-term-care and life insurance. These policies pay out whether or not you need care, and the premiums stay the same. They also tend to offer a better deal for single women.

For example, Lincoln Financial offers a combo policy called MoneyGuard, which allows you to spread payments over as long as 10 years and lets you file a claim even if you are still making payments. A 55-year-old man who pays $10,000 per year for 10 years could get a monthly long-term-care benefit of $5,500 for up to six years, growing at 3% compounded per year. If he didn't need long-term care, his heirs would receive a $130,000 death benefit, or he could cash in the policy and get back 80% of his premiums. A woman would get $5,100 per month for long-term care or a $122,000 death benefit.

If your primary need is life insurance, you can add a chronic-care rider to a permanent policy when you buy it, which lets you use up to 2% of the death benefit per month for long-term care, with a $340 daily maximum. This rider tends to add 10% to 12% to the premiums, says Byron Udell, CEO of AccuQuote.com.

You can also cover care costs by buying a deferred-income annuity in your fifties or sixties that starts to pay out in your eighties, when you’re more likely to need care (although you can use the money for anything). For example, a 60-year-old man who invests $125,000 in a New York Life deferred-income annuity will receive $72,279 a year for life starting at age 85 (or $54,712 if he gets a version that pays his heirs the $125,000 minus any payouts he received). You can invest up to 25% of your IRA or 401(k) balance, up to $125,000, in a deferred-income annuity called a QLAC, or qualified longevity annuity contract.

You may need to update your policies in light of COVID-19.
Insurance Question: Say Rioters Destroy My Business, Am I Covered?

Insurance Question: Say Rioters Destroy My Business, Am I Covered?

If you ask your broker, the answer may be no. But don’t just accept that response. Know what your policy covers, and how to protect yourself.
Even in Good Times, a ‘Silent Stalker’ Can Raid Your Retirement Plan 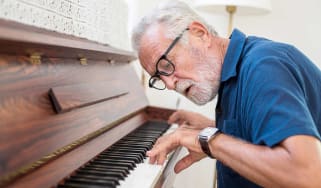 Even in Good Times, a ‘Silent Stalker’ Can Raid Your Retirement Plan

Chances are you or your spouse will need long-term care at some point … and it isn’t cheap. A look at the options reveals one interesting possibility:…
HSAs Get Even Better