Medicare for All: Promise and Perils

Incremental reforms are more likely than a complete overhaul. 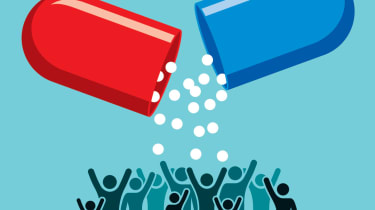 While Republicans pause in their battle against Obamacare until after 2020, Democrats have again set sail toward health care reform. And the intended destination is familiar: expanding coverage for the nation’s uninsured millions while trying to rein in runaway costs. Few experts (or politicians) question the need for reform; the U.S. spends more per capita on health care than any developed nation as the life expectancy of Americans continues to decline.

One proposal—Medicare for All—has emerged as an early favorite, pocketing endorsements from presidential candidates and currently enjoying broad support among voters. But the phrase’s popularity may obscure its political weight: Medicare for All represents a radical shift to a nationalized, single-payer system that would eliminate most of the private insurance industry.

The immediate political barrier is price. Federal spending would balloon under a single-payer system by trillions; 10-year cost estimates tend to hover around $32 trillion, or a roughly 70% increase in federal expenditures. Supporters say those costs would be offset by a significant decline in the overall amount we pay under our current system. The Poli­tical Economy Research Institute at the University of Massachusetts Amherst estimates that having a single entity pay and process all care would cut administrative costs dramatically. Plus, having a nationalized system’s huge insurance pool could cut drug and treatment costs by giving the government stronger bargaining power with care providers, allowing it to establish standardized prices and an annual systemwide spending cap. Still, the plan would require a significant tax hike, whether it’s an increase in payroll taxes, a new national sales tax, a wealth tax or a medley of tax increases.

Bumping into political reality. Many health economists are open to the idea of substantial reform, but “politically, it’s just not realistic,” says Ellen Meara, a health economist at Dartmouth College. Medicare for All would dissolve a trillion-dollar industry that employs half a million people and covers about 250 million beneficiaries. “The level of satisfaction with private coverage is quite high,” says Kristine Grow, of America’s Health Insurance Plans, a health insurance trade association and advocacy group.

Incremental changes that would extend health care coverage may be more politically and economically palatable. One option is to expand existing programs, such as allowing people as young as 50 to buy into Medicare. A public option would create a federal insurance provider that would compete with private in­surers rather than replace them. Medicare for America, introduced in the House in late 2018, would start with a public option but automatically enroll newborns in the system, gradually growing the insurance pool over time and moving toward a single-payer system.

In the meantime, it’s not clear how well voters understand the breadth of change promised by Medicare for All. While 74% of Americans surveyed in January by the Kaiser Family Foundation said they supported a national, government-administered health plan open to all, only 37% endorsed eliminating private insurance. Approaching 2020, expect voters to get a crash course in health care options.