Is It Ethical to Go Without Auto Insurance?

Auto insurance is mandatory in almost all states, but an estimated one in seven U.S. drivers don't carry it. 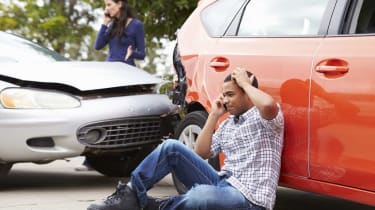 Q. I have a friend who lives in Virginia, one of the very few states that don’t require drivers to carry insurance on their cars. Instead, they may pay $500 a year into the state’s uninsured-motorist fund. My friend says she can’t afford car insurance (I disagree) and that she is a safe driver and isn’t likely to cause injury to someone else. What do you think about her position, ethically and financially?

Quiz: Car Insurance: Are You Covered?

A. Not much. First of all, let it be noted that the vast majority of drivers in Virginia (and a few states that allow a bond or large cash deposit in lieu of insurance) choose to carry car insurance because it’s both smart and responsible.

In Virginia, payment of the $500 fee does not provide your friend with any insurance coverage. If she causes an accident, she will be personally liable for damage and injury, and she will likely be sued by the injured party (or his or her insurer). If your friend has few assets to cover this, she is essentially choosing to stick someone else with the cost of her driving error. That’s not ethical.

Despite the fact that auto insurance is mandatory in almost all states, an estimated one in seven U.S. drivers don’t carry it. Many get it just for the purpose of registering their car but then stop paying the premiums. Most uninsured motorists have low incomes and few assets, so suing them for injury they caused—as required by the uninsured-motorist clause in most policies—is often a futile (and expensive) exercise.

States are now cracking down on these scofflaws in a variety of ways, most effectively by matching lists of lapsed policies (reported by the insurance companies) against vehicle registration records. Driver’s licenses can be suspended, tags revoked and reregistration denied without proof of current coverage. In about 10 states, uninsured drivers involved in an accident—even if it is caused by the other, insured driver—are denied the right to sue the other driver’s insurance company for certain damages, such as pain and suffering and lost earnings.