Where Clinton and Trump Stand on Student Debt

Clinton wants free tuition at many public colleges and less restrictive student loan terms. Trump dislikes student debt, but his plans are not as clearly defined. 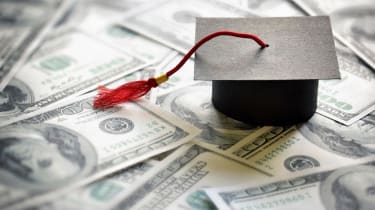 Key differences: Both Clinton and Trump say they want to reduce the rising levels of student loan debt on college graduates, but their methods differ.

Key Clinton quote: “No family and no student should have to borrow to pay tuition at a public college or university. And everyone who has student debt should be able to finance it at lower rates.”

Key Trump quote: “We’re going to work with all of our students who are drowning in debt to take the pressure off these young people just starting out in their adult lives. Tremendous problem.”

Clinton supports more federal help for students at public colleges and universities, free community college, and better rates and repayment plans for those with student loans. By 2021, her New College Compact Plan would allow students from households earning up to $125,000 a year to qualify for free in-state public school tuition, as long as families make some contributions to college costs and students work 10 hours per week. It would also let all borrowers automatically delay payments on federal loans for three months, refinance loans at the same rates as new student borrowers, and use an income-based repayment plan that guarantees borrowers don’t pay more than 10% of their income. Clinton says she would fund these proposals by raising taxes on the wealthy and closing tax loopholes.

Sen. Bernie Sanders (I-VT) gained popularity with promises of free college tuition and forgiveness of student debt in his primary battle with Clinton for the Democratic nomination. At the Democratic National Convention, Sanders formally nominated Clinton as the Democratic candidate and pledged to work with her. In Clinton’s speech, she said that she would work with Sanders to “make college tuition-free for the middle class and debt-free for all” and to “liberate millions of people who already have student debt.”

While Clinton's plan appeals to younger voters, it has recently raised concerns with private college presidents. Politico reported that many worried this plan would destroy small private colleges that are already geared toward low-income students. Patricia McGuire, president of Trinity Washington University, said that Clinton's plan plays into the "mythology" that private colleges are only for the wealthy. Smaller colleges for women, those with religious affiliations and historically black colleges and universities could be hurt.

Trump hasn’t detailed a plan to address rising levels of college debt. (At a Wisconsin town hall meeting, he said, “We’re going to do something for the students. We’re going to have something with extensions and lower interest rates and a lot of good things.”) But he has been outspoken about his belief that the government should not profit from loans. Trump adviser Clovis has stated that Trump opposes Clinton’s plan for debt-free higher education because there is no way to pay for it. Instead, he wants to increase the role of private banks in offering loans.

If you don't have to use your stimulus check for basic necessities, consider putting the money to work for you. You'll thank yourself later.
College During COVID

She encourages advisers to introduce students to financial planning.
Skip to ContentSkip to Footer