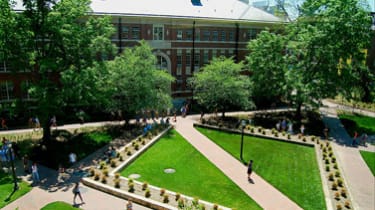 A lot has changed since Kiplinger’s began ranking best-value public colleges in 1998. Back then, total in-state costs—tuition, fees, room and board—rarely topped $10,000. Out-of-state price tags almost always came in below $20,000. And college value was a side topic (for everyone except Kiplinger’s) instead of a national conversation.

Most of our top 20 schools are on the East and West coasts, but midwestern schools are shooting up in our rankings faster than Iowa corn in August. Several had an especially strong showing this year, with the University of Michigan, in Ann Arbor (number six), breaking into the top ten. The University of Wisconsin at Madison landed at number eight. And Truman State University, in Kirksville, Mo., hit number 12, continuing its climb.

More than two-thirds of the states are represented in our top 100. But if sticking close to home isn’t an option or doesn’t appeal, take a look at our out-of-state values. UNC at Chapel Hill topped the charts this year at least in part for its generous financial aid, which brings the average cost for out-of-staters (after applying need-based aid) to $28,236, compared with a sticker price that’s a bit over $41,000.

As you browse the list of our top 100 values, remember that we begin our rankings by looking at nearly 600 schools. That means that every school on our list is a best value, from UNC–Chapel Hill at number one to the University of Oregon at number 100.

The rate of increase for some higher-education costs is slowing. In-state tuition and fees rose only 2.9% in 2012–13, the lowest increase in more than 30 years, according to the College Board. At $18,391, the average in-state cost, including room and board, is less than half the average private school bill of $40,917. And the job market is looking a bit brighter for new grads, with hiring up 7% for freshly minted bachelor’s degree holders, according to Michigan State University’s Collegiate Employment Research Institute.

But that’s not the whole picture. Financial aid isn’t keeping up with sticker prices, and the net price—what students actually pay—increased by 1.8% this year, to an average of $12,620 (again, including room and board). Colleges are still feeling the effects of the recession, when higher enrollment taxed the system and lower state funding sent tuition into the stratosphere. State universities typically see funding axed when times are tough, says Andy Carlson, senior policy analyst with the State Higher Education Executive Officers Association. “It has always been the easiest thing to cut,” says Carlson. Today, state and local funding per full-time student is at $5,906 per year, the least in inflation-adjusted dollars since 1980. And colleges rely more on tuition—or out-of-state enrollment—to make ends meet.

Some states are taking exceptional measures to tackle college costs. Florida and Texas recently introduced $10,000 degrees, using a combination of online learning, competency-based exams and classroom work to keep costs down for select majors. Oregon is considering waiving public-school tuition in exchange for a portion of students’ future earnings.

Despite ongoing questions about the value of college education, the evidence shows that postsecondary degrees are worth the price. College graduates tend to have higher lifetime earnings and graduate into better, more recession-proof jobs than those who don’t get that degree. “Higher education pays off,” says Carlson.

For academic quality, the University of North Carolina at Chapel Hill competes with elite private schools. Its 28% admission rate—even more selective than last year’s—means that only the most competitive applicants gain entry. Most students graduated on time, with 77% completing their degrees in four years.

UNC is the only school on our list to meet 100% of financial need. The total in-state cost approaches $20,000, but need-based aid cuts it to $6,454. Eligible low-income enrollees receive a debt-free education as part of the Carolina Covenant. And those who take on debt graduate with less than $17,000 to repay, on average, well below the national average of $29,400. “I want students to choose professions and careers that are driven by their interests and passions rather than by whether they can pay back a loan,” says Carol Folt, UNC’s new chancellor.

UNC may have staked its claim at the top of our list, but the University of Michigan, another state flagship university, has steadily ascended our rankings over the past three years. The reason: limited cost increases and improving academics. UM’s tuition is relatively high ($12,948 for in-state students, and $24,186 in total costs), but the 2014 tuition increase for Michigan residents was only $148, or 1.1%, the smallest percentage since 1985. And the total cost after need-based aid has actually decreased since 2011, to $10,930. In keeping costs down, “we’ve been relentless about it,” says UM president Mary Sue Coleman.

UM shaved $265 million from the budget, trimmed its tech and administrative costs and is working on raising another $1 billion—nearly double what it raised in its last capital campaign—in financial aid dollars. Coleman says hard times in Michigan gave it “a head start” on the recession. In one decade, Michigan fell from 14th to 39th in terms of state appropriation per student, giving the university plenty of practice in limiting costs. “We’ve become battle-hardened,” she says.

As operating costs head down at UM, academics head up. Freshman retention (the percentage of students who return for sophomore year) is at 97%, and graduation rates have been on the rise since Kiplinger’s started ranking public colleges. This year, the four-year rate jumped three percentage points, to 76%.

Keeping students engaged might be a challenge at a school of Michigan’s size, with almost 28,000 undergraduates. But the key, says Coleman, is splitting the student population into smaller groups through clubs and special-interest dorms. “Within the first year—even the first semester—students need to feel a connection,” says Coleman. “It doesn’t hurt that the students we’re recruiting are great students, too.”

She encourages advisers to introduce students to financial planning.
7 Ways the Pandemic Will Change College Forever

Colleges and universities face steep budget cuts, enrollment challenges and new types of competition as a result of COVID-19. We cover the changes you…
Skip to ContentSkip to Footer