The real struggle for a deal is often waged in the finance and insurance office. 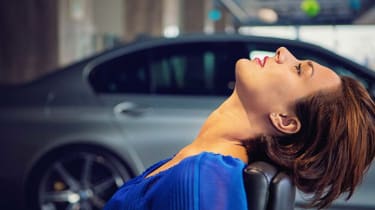 Buying a car is one of the most anxiety-producing financial tasks many people will ever tackle. Cars have price tags, of course, but everyone knows you’re not supposed to pay the full sticker price and that you’ll have to haggle face-to-face with the dealer to get a good deal.

So car shoppers long for transparency and to be able to lock in the price of the vehicle online. That’s why online “no haggle” services are popular. The Goliath in this space is TrueCar. According to the TrueCar website, a participating dealer gives you “an upfront, discounted price that includes all fees, accessory costs and incentives.” But as David Muhlbaum reports in Drive Time, TrueCar has some caveats that you should know about before you use the site to buy your next car.

David also tried out the CarBargains service provided by the nonprofit Consumers’ Checkbook organization. With CarBargains, you pay $250 to have the service shop at least five local dealers. CarBargains doesn’t rely on big data or algorithms. It’s effective because the dealers know they are competing for your business. It’s transparent because the dealers’ prices for the cars and all options you specify are measured against the published invoice price.

As fraught as negotiating a new car’s price can be, it’s even more stressful when you’re shopping for a used car, when a car’s repair and accident history is often unknown. I hit some speed bumps not long ago when I helped my daughter buy a used Kia Sportage. We started the search on Carvana, one of a handful of sites where you can buy or sell a used car at a no-haggle price and have it shipped to you—or, in my daughter’s case, to Madison, Wis. We also checked AutoTrader.com and found a local dealer with a Sportage for a few hundred dollars below Kelly Blue Book’s “fair purchase price.” I negotiated the price down a few hundred dollars by e-mail and sent my daughter to the dealership.

The F&I hurdle. My daughter and I agreed that she would finance about half the cost of the car with the dealership. But when she sent me the paperwork, I discovered that she had also signed contracts for a $2,500 extended warranty, plus an $895 gap insurance policy. Kias have a 10-year/ 100,000-mile power­train warranty, so the extended warranty was mostly superfluous. Gap insurance covers the difference between the insurance payoff if your car is totaled and what you owe on the loan. But because we made a down payment worth half the cost of the car, that scenario would never happen.

New or used, the real struggle to land a good deal on a vehicle is often waged in the finance and insurance office. Dealers are promoting extras, such as extended warranties and paint-protection plans, because the profit margin on car sales has shrunk. As reported recently in the Wall Street Journal, dealerships earned an average of $420 from a new vehicle sale last year, but they made an average of $908 per new vehicle on their F&I business, according to research by J.D. Power.

I told my daughter not to get an extended warranty, but either from an outsize trust in my ability to lock down the entire transaction long-distance or a misplaced faith in the used-car dealer, she was oblivious to the add-ons. She said she was sent to the F&I office, where she was told to sign a series of documents—and that was it.

After I, uh, reminded my daughter about some financial fundamentals, we went through the time-consuming process of canceling both products. One thing she remembered to ask was whether she could prepay the loan without penalty. The answer is yes, and that’s what she plans to do.