Whatever Happened to Howard Johnson's Restaurants?

Once a staple of roadside dining, the last HoJo's closed its doors in 2017. R.I.P. fried clam strips. 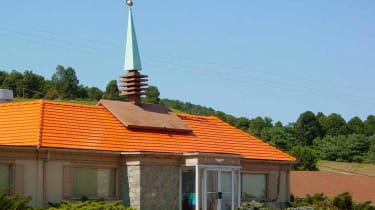 Remember Howard Johnson's restaurants? If you do, you're not alone. The popular purveyor of roadtrip staples once boasted hundreds of locations in the U.S. That's no longer the case. Take a nostalgic trip down memory lane with your taste buds to learn the restaurant's fate.

In the 1950s and '60s, the restaurant chain affectionately known as HoJo's was a can't-miss attraction for baby boomer kids being carted around in the car by their Greatest Generation parents. Howard Johnson’s was a pioneer of the nationwide roadside restaurant, replicating from coast-to-coast everything from its signature orange roof, cupola, the Simple Simon and the Pieman plaques, and its limited-menu food items. Howard Johnson's presaged the success of McDonald's doing the same thing. At its zenith, Howard Johnson's operated more than 1,000 restaurants, including the Ground Round brand.

So what took the mojo out of HoJo? Failing to update its menu -- centered around fried clams, chicken, hot dogs and ice cream -- its infrastructure and its marketing, along with increased competition from the likes of Friendly's, Applebee's and Chili's, sealed the fate of the Howard Johnson's restaurant chain. The last location closed in 2017, in Lake George, N.Y. (Note: The Howard Johnson hotel chain is still operating.)

Americans are facing a long list of tax changes for the 2020 tax year...and it's never too early to start thinking about next year's return.
9 Reasons to Retire in an RV

With a special nod to those of you spending more time at home, we found dozens of deals and discounts, plus ways to save (or make) money.
7 Ways PPP Loans Just Got Better

The Paycheck Protection Program Flexibility Act makes a number of changes to the popular small-business loan program. See how your business might bene…
Skip to ContentSkip to Footer