There’s nothing magic about a particular unemployment rate. No one number is enough to indicate that the economy is healthy.

Don’t be surprised if the U.S. unemployment rate hits 6.5% and the Federal Reserve still doesn’t start raising interest rates. Several Fed officials, including the current chairman, Ben Bernanke, and the incoming chairman, Janet Yellen, have suggested that a jobless rate that low would indicate that the economy was healthy enough to wean from today’s record-low interest rates. Months before it hit that level, the Fed would also have begun to taper off its massive bond buying campaign, gradually reversing its policy of quantitative easing. At its current pace of decline -- a 0.8 percentage point drop over eight months -- the unemployment rate would hit the presumed trigger at the end of 2014.

But the odds are it’ll be well into 2015 before the country’s monetary gurus are comfortable ratcheting up the federal funds rate—the rate at which banks borrow from one another or the Fed itself, effectively setting short-term rates for everyone. Why?

Because there’s a lot more to assessing the country’s unemployment situation than just the percentage of the labor force that is actively seeking a job but can’t find one. For starters, there’s the question of exactly who is in the labor force. The government’s definition—anyone who holds down a job or is actively seeking a job—ignores a sizable number of people. Every month, millions join the labor force: Young folks seeking their first jobs, new immigrants to the country, stay-at-home moms and dads who go back to work once their children reach school age and more. Nearly the same number drop out: New retirees, people who develop disabilities and can no longer work and, sadly, folks who want to work but have become so discouraged that they quit hunting for positions.

At least four out of every 10 who dropped out of the labor force from June 2009 to September 2013 were jobless and likely too discouraged to keep looking for work. The largest decline in the labor force participation rate over that 51-month period was for males ages 25 to 29, clearly not retirees eager to spend their golden years on the golf course. Once these folks stop looking for work, the government figures they’re no longer in the labor force, so they’re no longer counted as involuntarily unemployed. And the unemployment rate goes down. 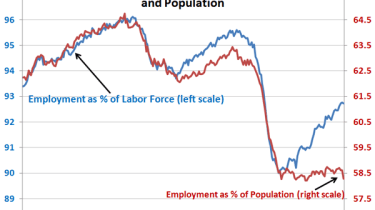 If discouraged job seekers don’t come back into the labor force anytime soon, the Fed can treat a 6.5% jobless rate as a signal that recovery is assured and stop goosing the economy with easy money. But if some or all of the disaffected workers do start hunting for jobs again, the declining jobless rate will reverse course. And the wise men and women of the Federal Reserve know that. So they’re unlikely to start withdrawing monetary policy props for the economy too swiftly, perhaps waiting to see some upward movement in the red line. It will probably be 2015 before short-term interest rates begin to rise.