The Cost of Debt Ceiling Brinkmanship

What are markets learning from repeated showdowns over the budget and debt ceiling?

For financial markets watching Washington’s shenanigans on the debt ceiling and budget, it’s becoming clear: Brinkmanship is the new normal. The willingness of politicians to play chicken with the U.S. Treasury’s creditworthiness and the degree of partisanship that dominates national politics these days make it very likely that even if the current limit on the Treasury’s authority to borrow is raised, it will do so only temporarily. Investors will have to weather a series of impending crises and, hopefully, last-minute reprieves. And the odds are the cost will get higher each time.

In 2011, the debt ceiling fight between President Obama and the Senate versus the House was averted by an agreement four days before the deadline. Although the limit was not breached, there were financial effects.

Ten business days before Aug. 4, the day the Treasury Department indicated it was likely to exhaust its borrowing authority, interest rates on four-week Treasury bills, which have the shortest maturity length the government sells, started to climb. From a rate of 0.01%, they climbed over the course of six days to peak at 0.17% before dropping back to 0.01% after the White House and congressional leaders reached an agreement to extend the debt ceiling. Over the same period, there were smaller pickups in the rates of three-month, six-month and one-year securities as well. The Government Accountability Office estimates that those increases drove up Treasury borrowing costs by $1.3 billion in 2011.

But the costs to taxpayers weren’t the only price paid for the political games. Short-term securities are heavily used as collateral in the repurchase agreement (RP or repo) market, where financial institutions that want to borrow cash overnight put up riskless securities as a guarantee that the lender will get its money back. The rapid rise in four-week T-bill and other short-term rates indicated a loss of investor confidence in the “riskless” part of the equation. Although the stress level remained far below the heights it hit during the 2008 financial meltdown, when the repo market essentially ceased, it was, nevertheless, worrisome.

Fast forward to 2013 and another debt ceiling crisis in the works. This time, rates on four-week T-bills started rising on Sept. 26, 15 business days before the presumed deadline of Oct 17. They also rose faster and further than two years earlier. After word of a potential agreement aired, the rates began to ease a little on Oct. 10 and 11. Again, there were costs to the Treasury of having to sell bills at the higher interest rate. Again, the decline in investor confidence put some stress on the repo market, as some lenders refused to accept short-term Treasuries as collateral. 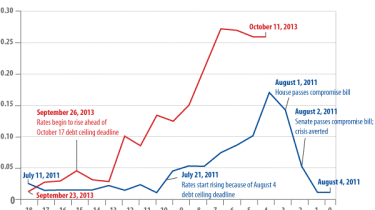 Investors have learned to anticipate potential losses in the value of short-term Treasuries as the debt ceiling is approached. Today, the prospect of a short-term, 60-day extension of the debt ceiling is under negotiation. The chances of an agreement setting aside the debt ceiling for a year or more are slim. So 40 to 50 days or so from now, markets are likely to go through the same exercise, forcing down the values of Treasuries — even more and faster than this time. What’s worse, the odds are it’ll happen again and again over the next year or two. 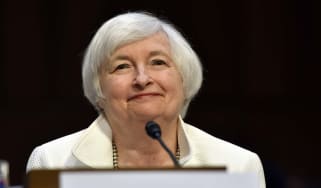