Both industries are surviving on economic merits, not government help.

Can renewable energy continue to thrive as government subsidies for it evaporate? For wind and solar power, the answer is a strong yes.

SEE ALSO: How to Lease Your Own Solar Power

Although the grant program ran out last year and has switched back to a less generous tax credit, the solar business is still booming.

Solar leases -- also called power purchase agreements, or PPAs -- let customers generate green energy and lower their electric bills without shelling out tens of thousands of dollars for a rooftop solar system. Instead, a solar company such as Roof Diagnostics installs and maintains the panels at little or no up-front cost and then sells the customer the resulting power below the price charged by the local utility. 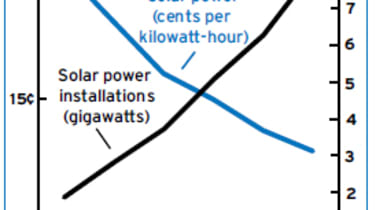 In return, the solar installer -- often in partnership with large financial institutions looking to cut their tax bills -- pockets the federal tax break and collects the revenue from selling the electricity.

In the wake of declining grants from Uncle Sam, such "third party" leases are the predominant method of financing solar power. Jamie Hahn, managing director at Solis Partners Inc., a New Jersey-based provider of solar designs and financing arrangements for businesses, figures that 80% of new solar installations now rely on some form of the PPA model.

Extending that model to corporate customers with larger power needs can be more challenging, says Solis Partners' Hahn, since the installation company and any financial partners have to invest more money in a bigger installation, and then suffer more if the customer falls behind on its power bills. But he's confident that leasing and other traditional financing mechanisms, such as bond issues, will keep growing to meet the needs of commercial customers aspiring to go solar.

If improving affordability and expanding financing options make solar power more realistic for more customers, state governments are keeping up the pressure on electric utilities to invest in more renewable energy. About three-fourths of states have adopted green power goals -- known collectively as renewable portfolio standards, or RPS -- requiring their respective utilities to generate a portion of their total power from renewable sources by a target date.

These RPS targets vary widely, from California's mandate of getting 33% of its power from renewables by 2020, to South Dakota's voluntary target of 10% by 2015. And different state standards allow for different methods of meeting the goals -- say by importing clean power from neighboring states, or by allowing a wide range of low-carbon energy sources, such as hydropower.

But the net effect of states' RPS goals is to ramp up investment in wind and solar power even as funding support pulls back. Kyle Aarons, a solutions fellow and an expert on state-level renewable energy programs at the Center for Climate and Energy Solutions, says there are "definitely challenges" for states trying to hit their RPS targets. But with a few exceptions, they're staying the course rather than watering down their standards.

Vermont Law School professor Kevin Jones, who studies state RPS programs, figures that trend will continue, despite some "bumps along the road." One big bump coming up is the expiration of Uncle Sam's tax credit for wind power after 2012. That'll make it tough for states to adopt loftier RPS targets, he says, since wind supplies the bulk of renewable energy today. But falling prices of wind turbines and a slow rise in the price of natural gas -- wind's biggest energy competitor -- will make wind more financially attractive in a few years.

The fate of alternative energy ultimately hinges on its ability to compete on a level playing field with conventional energy sources. The gradual decline in government subsidies will force renewable power to compete based on its economic merits.

For wind power, matching the cost of electricity generated from fossil fuels is a long-term project, given the relatively high cost of installing large wind turbines. But for solar, the goal of competing with conventional electricity sources -- the point known as "grid parity" -- is already in sight. Consulting firm McKinsey & Company sees the cost of electricity from future solar panels falling to 10¢ per kilowatt-hour by 2020. That would match the price the average consumer pays for power today.

That trend has already knocked down the price of rooftop solar arrays in California to less than $4 per watt of output potential, according to Paul Detering, chief executive of PPA provider Tioga Energy, based in California. Those sorts of costs, which would have been almost unimaginably low a few years ago, have him excited about solar's long-term prospects. "I don't want to be in a business that needs subsidies forever," he says.

Given the falling cost of solar power, the potential for efficiency gains to drive further decreases and the expanding universe of financing options, Solis Partners' Hahn concurs: "I'm very, very bullish" on solar.