More of the jobless are looking again. By year-end, they should get better results.

We expect unemployment to hit 9.5% by year-end, and the April surge in payroll numbers -- a net increase of 290,000 jobs -- supports our conclusion. Not only did the monthly increase beat market expectations by 90,000, but aspects of the report also attest to more substantial gains ahead. First, Census-related hiring, at 66,000, was far more modest than expected. So far, Census hiring amounts to just 154,000 workers -- below the level at this point during the 2000 Census. Because the Commerce Department plans total Census hiring to be greater this decade than last, the sluggishness of hiring so far implies huge gains next month. We expect net job growth for the Census alone to be around 300,000 in May, with a total gain closer to 400,000.

See More of our Economic Outlooks:

Aside from Census hiring, other April job gains were impressive. At 223,000, growth in non-Census employment posted its best showing since March of 2006. What’s more, the gains were broadly based, including even the beleaguered construction sector. Plus the usual monthly revision was hugely favorable this time, indicating that 121,000 more positions were added in February and March than previously reported.

The robust job growth overshadows an uptick in joblessness, which posted a surprise jump to 9.9% in April, its first increase in four months. The increase in the unemployment rate from 9.7% in March may actually be good news, though, since it resulted largely from a wave of people looking for work, rather than from more people being laid off. The labor force increased 805,000 -- one-quarter of whom were discouraged workers reentering the labor market, encouraged by more employment opportunities. As employers continue to add to their payrolls, the unemployment rate will decline.

Three factors are driving the job market: stronger economic growth, improved confidence among employers and waning productivity gains. Real GDP growth has proceeded at close to a 4% pace since the middle of last year, but skittish employers were initially reluctant to hire. Labor productivity gains -- the amount of output from each hour worked -- were astronomical as managers instead opted to work the existing labor force more intensively. Indeed, the growth in labor productivity over the past year, at 6.3%, was the best performance since 1962, and almost impossible to sustain. That’s why we expect employment gains to remain solid through year-end -- at a minimum, racking up monthly increases of around 200,000, excluding Census-related distortions, and a total employment gain of 2 million for 2010. 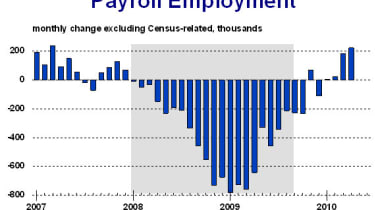