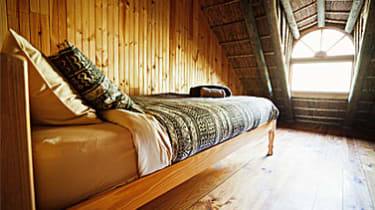 When you think of hostels, you likely conjure up images of noisy late-night parties and dorm rooms jammed with backpackers. But increasingly, hostels are rolling out features you’d expect at a boutique hotel: private rooms, stylish décor, peace and quiet. Some even boast hot tubs and swimming pools. “The line between hostels and hotels has blurred,” says David Orr, CEO of Hostelz.com.

Upscale hostels tend to be affordable but pricier than the standard experience. Earlier this year, Stephanie Edsall, 60, and her husband, Mike, paid about $100 a night to stay in a private room at Miss Sophie’s, a hostel in Prague, Czech Republic. (You can stay in Miss Sophie’s dorm space for as low as $7 a night per person.) “For what we got, it was worth it,” Stephanie says. Among the perks at Miss Sophie’s are cable TV in private rooms, free Wi-Fi and an “amazing” breakfast spread for less than $10.

Before you book a hostel, go online to get a sense of its atmosphere. For upscale hostels, you’ll find photos of décor instead of parties, and comments about cleanliness in reviews. The Poshpacker lists hostels that meet certain standards, including room prices of less than $100 a night, outstanding design and private sleeping spaces.