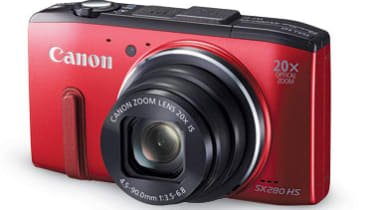 Smart-phone cameras have long been good for quick pics when you didn’t have your real camera. But they were no match for the images that a high-end point-and-shoot could produce. Now, phone manufacturers are upping their game. We’ve chosen the best smart-phone cameras among the top three mobile platforms—iPhone, Android and Windows Phone—as well as two top-notch point-and-shoot cameras.

Camera phones. The latest iPhone, the Apple iPhone 5s ($200 to $400 at AT&T or Verizon and $100 to $300 at Sprint with a two-year contract), is a standout shooter. The excellent rear-facing camera captures images with superior clarity and detail, even in low light. Its 8-megapixel sensor is average as smart phones go, but Apple has enhanced the camera’s light sensitivity by enlarging both the pixels and the aperture—resulting in brighter images and making the 5s competitive with camera phones that boast more megapixels.

The camera’s built-in image stabilization helps prevent blurring, and a new flash system with two LEDs, white and amber, determines the right balance of color and light to enhance picture quality. Other new tricks include a speedy burst mode that snaps ten pics per second.

There are only a handful of Android smart-phone cameras that even come close to the iPhone. Count the Samsung Galaxy S4 (starting at $100 for the 16GB model at AT&T and Sprint with a two-year contract) among them. Its 13-megapixel rear camera captures vibrant outdoor images. Although the number of megapixels isn’t everything when it comes to image quality, more is better when you’re cropping a photo and want to retain its resolution.

The camera interface will be familiar to longtime Samsung users, and its image stabilization is comparable to the iPhone’s. An ingenious setting that uses the front and back cameras simultaneously lets you insert yourself into a shot.

Windows Phone may be a distant third in the smart-phone market, but it’s the front-runner in the megapixel race. The Nokia Lumia 1020 ($100 with a two-year AT&T contract) has a 41-megapixel camera (yes, you read that right) that protrudes slightly from the phone’s rear. When you take a picture, the Lumia 1020 actually captures two images: a 5-megapixel photo for sharing online and a larger, highly detailed image that’s ideal for zooming and cropping. The camera has plenty of manual options for shutterbugs, too.

Point-and-shoots. Although smart-phone cameras have come a long way, they are still no match for a camera as well equipped as the Canon Powershot SX280 HS ($280). This 12-megapixel powerhouse features a long (20x) optical zoom (camera phones rely on digital zoom, which just crops a portion of the image and makes it bigger), a 25-millimeter wide-angle lens and very good image stabilization. It has Wi-Fi connectivity to upload photos, and built-in GPS makes it easy to log the location and local time of your photos and videos.

For DSLR quality without pricey detachable lenses, the 20.2-megapixel Sony Cyber-shot DSC-RX100 ($600) boasts zippy performance (ten frames per second), sleek design and numerous customizable features, such as memory recall for three groups of preferred settings. An array of shooting modes and various manual settings make this a camera for the serious amateur.