A Skewed Take on Life

The classic board game gets a cashless makeover, denying children an opportunity to learn how to manage hard currency.

Say it ain't so, Hasbro! Recently, the toy manufacturer announced that later this year it will launch a new edition of its venerable classic, The Game of Life. The new version, called Twists & Turns ($35), will replace play money with a Visa-branded card. Players insert their cards into a gizmo, called a LIFEPod, that keeps track of each player's finances so there's no need for a banker.

As Matt Collins, Hasbro's vice-president of marketing, explains, "We knew it was time to reflect the way people choose to pay and be paid -- and replacing cash with Visa was an obvious choice." 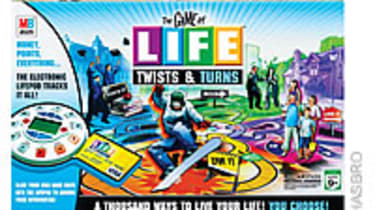 Well, it's not obvious to me. I'm a big proponent of using board games to teach children about money, and the classic Game of Life has always been a family favorite. It covers a lot of territory: careers, college, mortgages, insurance, taxes, stocks and dividends. And it lets kids feel the pleasure of collecting a salary, or the pain of paying for college, by piling up or depleting their stacks of money.

Plus, the player who's designated to be the banker has to count out each player's cash, pay salaries, collect fines and make change -- a painless way for kids to hone their math skills.

For all those reasons, using a card just doesn't cut it -- especially when that card is advertising a company's logo to 9-year-olds, the game's target audience. And -- yikes! -- Monopoly may be next. Hasbro has already introduced a cashless version of the game in the United Kingdom.

The adults who dream up these things say they're just trying to prepare kids for a cashless society. But they make the mistake of thinking like grown-ups instead of children.

A cashless society may be a great thing for credit-card issuers, online retailers and adults who use plastic as a convenience. But kids see the world in more concrete terms. Although the Visa Life card isn't labeled a credit card or a debit card or a prepaid card, the distinction is lost on youngsters.

To kids, plastic of any kind isn't as real as money they can see and feel. With a cashless society looming in their future, teaching children to manage hard currency is more important than ever.

Readers of this column know that I've been on this crusade for a long time. Two years ago I wrote that giving kids credit cards is like letting them use drugs early so they won't turn into addicts (see Kids and Credit Cards Don't Mix).

But I'm not alone on my soapbox. There's plenty of research to back me up, and I'll write more about that next week.

Next: Credit Cards Not a Game

Tax breaks aren't just for the rich. There are plenty of them that are only available to middle- and low-income Americans.
Find the Best Money Market for You