Beneficiaries can lose big tax advantages if they do not take the proper steps after inheriting an IRA.

EDITOR'S NOTE: This article was originally published in the July 2011 issue of Kiplinger's Retirement Report. To subscribe, click here.

There's a lot to like about inheriting an IRA, but the gift does come with strings attached. Beneficiaries, especially those who are not the surviving spouse, can easily lose big tax advantages if they do not take the proper steps soon after the death of the parent or other benefactor.

You can keep the money in the tax-deferred account and stretch out distributions -- and tax payments -- over a lifetime. You must take minimum distributions based on your life expectancy, but the rest of the account can grow tax-deferred.

Your first move when you are notified of your inheritance: Warn the IRA's custodian not to liquidate the account and write you a check. If that happens, you will pay tax on the entire account. "It's game-over then," says Rial Moulton, co-founder of Retirement & Tax Planning Specialists, in Spokane Valley, Wash.

Split, retitle and withdraw. If you are one of several beneficiaries, divide up the account. "Establish separate accounts so each can utilize their own single life expectancy," says Doug Zarookian, vice-president and New York branch manager for Charles Schwab.

You must split the account by December 31 of the year following the death of the IRA owner. If the IRA is not split, the size of the withdrawals will be based on the oldest beneficiary's life expectancy.

Say the primary beneficiaries of an IRA are a mother who is age 89 and children who are in their fifties. "Based on Mom's life expectancy, the IRA would have to be paid out rapidly," says Twila Slesnick, co-author of IRAs, 401(k)s & Other Retirement Plans (Nolo, $35). "It would be a disadvantage to the kids."

Nonspouse heirs cannot roll the money into their own IRA. You must open an account for an inherited IRA, and the title must include your name and the name of the person who left you the money. The inherited IRA should be named something like "John Doe's (deceased) IRA for benefit of Susan Doe."

Take special care if your parent named a charity as a beneficiary along with you and other beneficiaries. You must split off the charity's portion by September 30 of the year following the account owner's death. If you don't, the account must be emptied within five years after the owner's death.

A nonspouse heir's first required minimum distribution must be taken by December 31 of the year following the account owner's death. If you miss the deadline, the account must be paid out in five years. A beneficiary who inherits an IRA after the account owner began taking RMDs must take the owner's RMD in the year the owner died, if it was not already taken.

Rules for spouse. Spouses have more leeway than nonspouse heirs. They can either keep the inherited IRA in their deceased spouse's name or roll it into his or her own IRA.

For most spouses, especially younger ones, rolling the IRA into their own account makes sense because they can hold off on taking distributions until age 70 1/2. However, a spouse who is younger than 59 1/2 and taps the account will pay a 10% early-withdrawal penalty.

Younger spouses who need the money early would be better off keeping the money in the old IRA. "Once they attain 59 1/2, they could roll it over to their own IRA," says Zarookian.

Turning down the cash. If an heir, usually a spouse, decides she doesn't need the money, she can "disclaim" the IRA. The money will then pass to the other beneficiaries, usually the children. A disclaimer must be filed within nine months after a benefactor's death.

Because the spouse is refusing the money, the disclaimed amount won't count toward the spouse's $5 million federal estate-tax exemption. A spouse can disclaim a $5 million IRA, pass it on to children who are listed as beneficiaries, and still leave them another $5 million when she dies.

The younger the heirs are, the longer the money can grow. Consider a 20-year-old grandson who gets a disclaimed $50,000 traditional IRA. By taking out the minimum each year and assuming a 6% average return, the IRA could grow to $1.5 million over the heir's lifetime, Moulton says.

Many beneficiaries who inherit IRAs lost a major tax break recently, but five types of people still qualify for this “stretch IRA” benefit. Are you am…
6 Money-Smart Ways to Spend Your Stimulus Check

If you don't have to use your stimulus check for basic necessities, consider putting the money to work for you. You'll thank yourself later.
These 2 Words Could Send Your Retirement Money to the Wrong Beneficiary 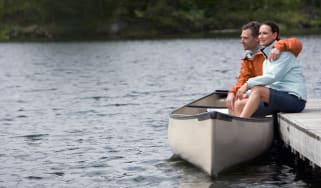 Should you really agree to give up control of your assets? There are some good reasons to get this type of trust, but there are some major drawbacks a…
Skip to ContentSkip to Footer