Reprieve on Medicare B

Most people will avoid premium hikes, but some could pay more.

Health costs continue to rise, but the majority of Medicare beneficiaries won't see an increase in their Part B premiums in 2010. Nearly 75% will continue to pay $96.40 per month for Medicare-covered doctor visits and outpatient services, thanks to a "hold harmless" provision that prevents Social Security checks from declining from one year to the next. Most people have their Part B premiums deducted from their Social Security checks. Because there will be no cost-of-living increase in benefits in 2010, their Medicare Part B premiums can't rise, either.

However, the hold-harmless provision does not apply to about one-fourth of Medicare beneficiaries: people who are new to Medicare in 2010, low-income beneficiaries whose premiums are paid by Medicaid and high-income beneficiaries who pay a surcharge. For most of them, premiums could increase substantially, jumping by $14.10, to $110.50 a month, in 2010, according to the Centers for Medicare & Medicaid Services. The hike is so large because those not protected by the hold-harmless provision must bear the entire burden of the increased cost.

But high-income beneficiaries will pay even more than that. That's been the case since 2007, when income surcharges were added to Part B premiums for people above a certain income level (see the table).

Congress is considering legislation that would freeze Medicare Part B premiums at 2009 levels for everyone in 2010 -- even those who aren't protected by the hold-harmless provision. High-income beneficiaries would still have to pay a surcharge, but their total costs would remain at 2009 levels (ranging from $134.90 to $308.30 per month, depending on income).

Although the House has approved the legislation, the Senate has yet to act and may miss the deadline for programming computers in time to allow any last-minute changes to January benefit checks. 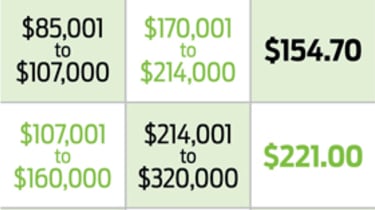 The added flexibility should help workers deal with unexpected medical and dependent care expenses from the coronavirus outbreak. But not every employ…
Skip to ContentSkip to Footer