A growing number of programs are treating dementia symptoms by engaging patients in various activities, from museum visits to dancing. 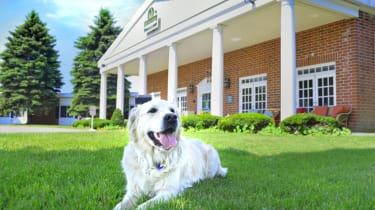 Lynn Porter has helped people with dementia learn to draw and led an American history discussion with elementary-school students. Hardly extraordinary -- except that Porter also has dementia.

Diagnosed with Alzheimer's disease in 2006, Porter, a retired jeweler from Cambridge, Mass., spent two years in a pioneering day program outside Boston called Learning for Life. Students with early-stage dementia explore subjects that interest them, whether it is Mozart or the poet Robert Frost. For a unit on Russia, they visited a museum that had Russian icons and made Russian teacakes.

Although Porter, 83, left the program because of another medical condition, she continues to draw, and a local assisted-living facility is showing an exhibition of her drawings. "The program brought her out intellectually and engaged her in activities she never would have done before," says her husband, Bill Porter.

Learning for Life is among a growing number of programs that are treating Alzheimer's and other forms of dementia in new ways. "We know that meaningful engagement, not psychotropic drugs, is a way to replace dementia symptoms of anxiety, apathy, agitation and aggression," says John Zeisel, founder of the I'm Still Here Foundation, which runs Learning for Life. Zeisel is also president of Hearthstone Alzheimer Care, which operates two assisted-living facilities in Massachusetts that implement his ideas.

The engagement may be with animals, the arts or other activities. The Museum of Modern Art, in New York City, and other museums nationwide offer gallery tours geared to people with dementia and their caregivers. Classic movies and popular music are used to trigger memories and conversation. Studies show that the arts can boost concentration, mood and mobility while reducing pain, loneliness and the need for medication.

Woody Cartwright says Learning for Life allowed his father, Bill, who has Alzheimer's, "to use the cognitive skills he still had." Cartwright, who lives in Lincoln, Mass., says, "I would not have been able to provide activities such as museum visits or live music, or long conversations about different parts of the world or times in history." Cartwright's father was in the program for a year and a half, and left in February 2015, to move into an assisted-living facility.

At the Hebrew Home at Riverdale, in New York City, nursing-home residents with dementia can visit a Judaica art museum on the campus. Residents who can't get to the museum can view paintings and sculptures that are brought to their living areas. "The more we can encourage creative approaches, the more the quality of residents' lives will improve," says Daniel Reingold, president and chief executive officer.

The Hebrew Home also uses baseball, a beloved sport for many residents of this Bronx facility, to elicit memories and bring pleasure to residents. The home has an exhibition that includes a Yankees dugout, photos of Yankees players and historic games, a locker, four ballpark chairs and an old radio with broadcasts of Phil Rizzuto announcing games. Yankees players have come to visit. "Sports is a powerful connector," says Reingold. "We're finding it can also reduce agitation."

From Llamas to Midnight Dancing

In rural Littleton, Mass., the Life Care Center of Nashoba Valley is teeming with animals. Llamas Travis and Vijay live outside the memory-care unit and visit the floor to be stroked and fussed over. Memory support unit director Lauren Gaffney brings her greyhound Lucy to work; other staff members bring a schnauzer and two golden retrievers. The animals are comforting and engaging, says Gaffney.

From the TV room, residents can see a group of chickens outside. Residents help gather eggs, and can bring the chickens indoors and hold them. "There's little that interests my aunt, but one of the few things is animals," says the niece of one resident. "It's good to see her spark come back when she is around them."

In a departure from the typical regimented schedule for dementia patients, the Hebrew Home has an all-night program for those who don't sleep when the rest of the world does. (Sleep disturbances are common with Alzheimer's disease.) For exhausted families, the 7 p.m. to 7 a.m. program provides respite care and door-to-door transportation.

During the wee hours, patients receive physical and occupational therapy and aromatherapy. Activities range from dancing to listening to visiting musicians to working on puzzles. Lisa Peet's mother, Rhoda Cohen, has been attending the program for two years. "I know she is always going to be stimulated and have people around. It gives her a community," Peet says.

Design features can also improve an Alzheimer's patient's mood and functioning. Take lighting. Before Abe’s Garden, in Nashville, Tenn., was built, the staff met with dementia researchers and manufacturers to design lighting calibrated to an older eye. Abundant natural light can help improve mood and sleep.

Raised garden beds at different levels accommodate wheelchairs and walkers. Food is grilled outside every week -- the smell of burgers can stimulate residents' appetites. And the outdoor fireplace is a gathering spot to listen to or make music at night.

Abe's Garden is collaborating with Vanderbilt University's Center for Quality Aging. The center helps assess residents' needs, trains and monitors staff, and tweaks programs to improve care of Alzheimer's patients. Vanderbilt experts collect data on patient care and may come up with new approaches, such as suggesting how staff might better engage a resident.

Five years ago, John Aron's widowed mother moved from New Jersey to Nashville to be near him and his family. When she was diagnosed with Alzheimer's, she moved from a condo to a retirement community but eventually wound up in a nursing facility. "My mother was isolated in her room and depressed," Aron says.

Last September, she was among the first residents to move to Abe's Garden. "Now, she spends almost the entire day out of her room engaged in a variety of activities. Her anxiety has diminished," he says. "My mother is now on a path to having real friendships with other residents and caregivers."