How I can Afford Semi-Retirement at Age 56

When you've got a novel to write, but still have bills to pay, well-timed stock sales can help keep the balance. 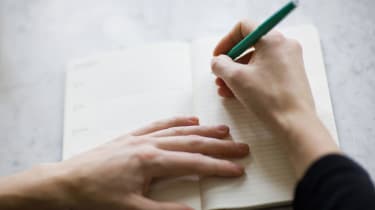 Whenever I’ve made a big change in life, from getting divorced to leaving my job at the Los Angeles Times, I’ve struggled to explain my motivation. I had reasons, of course—lots of them. Therein lies the problem. How do you summarize a complex decision tree that took years to climb?

I feel the same way about telling people that I “semi-retired” a year ago, at the age of 56. Why? Although I love what I do for a living and always have, a couple of things made me wonder whether retiring—or at least significantly scaling back from paid work—was possible.

One was that someone close to me became ill, which made me realize just how precious time is. I also got married to a wonderful guy who can always think of something fun we should be doing. And then there was the nagging thought that I had several long-held goals—traveling for months at a time, writing a novel, becoming fluent in a foreign language—that I had never had time to accomplish. By this time last year, the chorus in my head was chanting, If not now, when?

So I did what every prospective retiree does. I asked myself if I had enough money to buy more time. When I realized that the answer was yes, I entered into another familiar exercise for retirees: figuring out how much I needed to meet my expenses and how best to generate that income from my savings. Health insurance was not a concern. As a longtime freelancer, I already had a high-deductible plan.

I was not going to be completely without income. I kept a few paying gigs, such as this one, that I enjoy. But I scuttled everything else, which eliminated about 60% of the income I figured I’d need.

There are plenty of strategies to come up with that other 60%. Mine is simple. First, I looked at the parts of my taxable portfolio that already generated income—bonds and dividend-paying stocks. Money that was automatically reinvested now pours into a money market account. But I still needed to replace 40% of what I typically spend. That left two choices: take early distributions from a retirement account or further tap my taxable accounts by selling individual stocks.

Help from the IRS. Unbeknownst to many Americans, you don’t always have to pay a 10% penalty if you tap your tax-favored retirement assets before age 59½. You just have to follow some arcane rules that fall under Section 72(t) of the tax code. The rules let you take “substantially equal” payments based on your life expectancy from an IRA, penalty-free, as long as you continue to take these payments for five full years or until you reach age 59½, whichever is later. You don’t have to take those payments from all of your retirement accounts. If you have several, as I do, you can pick just one and annuitize it, based on the IRS rules. After you pass the five-years-or-age-59½ test, you can alter your withdrawal schedule.

The downside is that the IRS rules are complex, and I didn’t want to lock myself in to their schedule. Moreover, although you won’t pay a 10% penalty, you will pay tax on the withdrawals at your ordinary income tax rates. Even at reduced levels of income, those are higher than capital gains rates.

So I’ve opted to strategically sell stocks in my taxable portfolio about six months before I expect to need the money. This involves analyzing my holdings to create a “sell” list and then executing the sales when I think a stock has hit a near-term high or has limited potential. The method is not perfect. Some stocks keep rising after you expect them to stall. But if I were advising someone else, I’d tell that person not to forgo an attainable good in pursuit of a probably unattainable perfect, so I’m sticking with this plan until I find a better strategy. Meanwhile, I’m on the fourth revision of that novel.

Fixed-income investors have a rocky hill to climb in 2021. These are seven of the best bond funds to buy for this tall task.
13 States That Tax Social Security Benefits