Start by looking at which ones performed the best over the past ten years. Here are 25.

Stocks, as I have said too many times to count, are meant to be long-term investments. So one challenge for investors is to figure out which companies will perform best over, say, the next ten years. But how?

A good way to start is to look at past performance, so I asked the number crunchers at Standard & Poor's to calculate which stocks gained the most over the past ten years. I limited the universe to stocks that trade on U.S. exchanges and currently have a market capitalization of at least $1 billion. Of the top 25, four are energy companies, three are health-care stocks, two are in the chemical sector, five in metals, and the rest are scattered among such disparate sectors as machinery, soft drinks and shipping.

Any pattern here? The list is a bit heavy on commodities producers. That stands to reason, given that the price of crude oil roughly quadrupled during the period. But two characteristics are even more salient: First, all but four of the companies were tiny ten years ago. Second, the list contains a surprising number of foreign companies. The screens I set to eliminate small-company distortions and non-U.S. companies in general simply could not suppress these powerful trends.

Take size. Deckers Outdoor (symbol DECK), which makes sandals, hiking shoes and boots under such labels as Teva and UGG, today has a market capitalization of $1.2 billion (stocks that I like are in boldface). But ten years ago, its market cap was minuscule. Since then, the stock has risen from about $3 a share to $93 (all return and price data are through November 30) -- an annualized return of 42% (by contrast, Standard & Poor’s 500-stock index lost an annualized 0.6% over the same period, including dividends). Deckers shares remain attractive. In the third quarter of 2009, earnings climbed 31% from the year-earlier period on a 16% gain in revenues. Yet the stock trades at a mere 11 times estimated 2010 earnings.

Another example: Green Mountain Coffee Roasters (GMCR), maker of such coffee brands as Tully’s and Newman’s Own. Over the past ten years, the stock of the Vermont-based company grew at an annual rate of 51%; its market value grew 60-fold, to $2.7 billion.

The reason you don’t see (and probably never will see) a General Electric or a Pfizer on a list of top ten-year performers is that a company with, say, a market cap of $200 billion cannot possibly grow 50-fold in ten years, to $10 trillion in market value -- not in a $14-trillion economy. The law of large numbers kicks in. Only one of the past decade’s top 100 performers has a market cap today in excess of $100 billion; that’s Apple (AAPL), which ranks 100th. If you want to make big money in the stock market, you’ll improve your odds immensely if you invest in tiny companies. 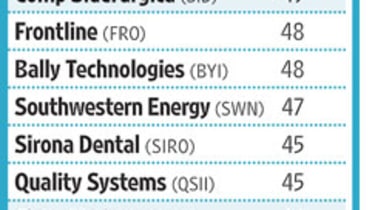 The international angle is more surprising. Of the 25 best performers over the past decade, three trade here as American depositary receipts. Two other foreign highfliers trade in the U.S. without the benefit of ADRs: Frontline Ltd., a Bermuda shipping company with Scandinavian roots; and Inmet Mining, headquartered in Toronto.

One other top-25 stock and the 26th on the list do most of their work abroad but are managed from the U.S.: Cognizant Technology Solutions (CTSH), an information-technology outsourcing firm with a heavy presence in India (it's number 26), and Central European Distribution (CEDC), which distributes alcoholic beverages in Russia, Poland and Hungary. Central European trades at a modest ten times estimated 2010 profits, even though analysts expect earnings per share to grow at an annualized rate of 19% over the next three to five years.

In all, 31 foreign stocks were among the decade’s 100 best performers -- including companies from China, Russia, Hong Kong, Australia, Israel and the United Kingdom. Still, Latin America was the standout region for both individual stocks and mutual funds. According to Morningstar, Latin American funds, with an average annualized return of 17%, were the second-best performing group over the past ten years. Only precious-metals funds, with an average return of 18% per year, did better.

What lessons can we draw for picking stocks over the next ten years? First, the past decade’s losers are often the next decade’s winners -- and vice versa. Gold, energy and other commodities performed poorly during the 1990s. The stock of Southwestern Energy (SWN), which ranked eighth in returns during the past decade, was flat the decade before. Technology, the star sector of the 1990s, was the worst-performing over the past ten years. Just look at Microsoft: Its shares rose by a factor of about 50 in the 1990s, then fell by roughly one-third over the following ten years.

Next, don’t limit your search to the U.S. Latin America has been the hot region lately -- who knows what’s next?

Finally, think company, not just industry. For example, although many casino stocks got clocked over the past ten years, Bally Technologies (BYI) -- which makes information systems that handle monitoring, accounting and security for hundreds of thousands of gaming machines -- thrived, and its stock soared an annualized 48%. Among the top 60 performers are companies in unlikely sectors, such as Genessee & Wyoming (GWR), which operates short-line railroads; CarMax (KMX), a chain of auto dealerships; and LAN Airlines (LFL), a Chilean-based carrier.

Drawing on these lessons, I suggest that you begin the search for tomorrow’s superstars with technology and communications stocks. That’s not merely because the sectors fared so poorly over the past decade, but also because these are areas in which the U.S. enjoys competitive advantages. Tech will thrive, under my theory, because it has to thrive -- and government is likely to help.

You’ll improve your odds of finding champs if you focus on fast-growing Asian stocks for the foreign portion of your portfolio. Asian stocks (excluding Japan) performed well over the past decade, returning an average of 9.7% annualized. But that’s anemic when you consider the region’s astounding growth.

And, of course, you should think small. The biggest winners will be among micro caps -- companies with market caps today of less than $300 million. Buy a bundle of them (but don’t confuse micro caps with low-priced penny stocks, issues with tiny market caps and low-single-digit share prices). One approach, favored by Peter Lynch, is to look for com-panies you know yourself. Perhaps you’ve seen Green Mountain Coffee and UGG footwear jumping off the shelves.

Or steal ideas from managers of micro-cap funds with superior records. One such fund is Wasatch Micro Cap Value (WAMVX). Among its top holdings are a couple that look attractive, including Heritage-Crystal Clean (HCCI), which provides hazardous-waste services and in early December sported a market cap of $117 million; and Duckwall-Alco Stores (DUCK), a discounter that focuses on towns with fewer than 5,000 residents. Its market value is just $60 million.

At last report, Royce Micro-Cap Investment (RYOTX), another fund with a fine record, held Syneron Medical (ELOS), which markets wrinkle treatments to dermatologists and has a market cap of $283 million; and Arctic Cat (ACAT), whose market value has shriveled to $123 million because of stagnating snowmobile sales. Call it a global-warming-skeptic play.

James K. Glassman is executive director of the George W. Bush Institute, in Dallas. His next book on investing will be published later this year. Glassman owns none of the stocks mentioned.