Once the Federal Reserve finally starts raising interest rates, this is one group that should benefit. 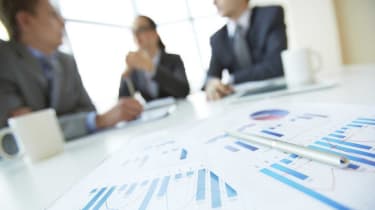 If you think low interest rates have made a dent on your investment income, consider the impact they’ve had on asset-management firms. For years, many money managers have had to waive fees on money market funds to avoid delivering negative returns to investors. By one estimate, the need to prop up money funds has cost the industry nearly $36 billion dollars since 2009.

Needless to say, asset managers would welcome action by the Federal Reserve to raise short-term rates from today’s negligible level. So it didn’t come as a shock that stocks of money-management companies tumbled after the Fed declined to raise rates in mid September.

But all is not lost for the group. With the U.S. economy on relatively sound footing, Kiplinger forecasts that the Fed will lift rates by one-quarter of a percentage point by the end of this year, followed by two more quarter-point hikes in 2016. Those increases should lead to commensurate jumps in the short-term debt that money-market funds invest in, allowing fund yields to rise from today’s near-0% level. But asset managers are unlikely to share all of the higher interest payments with clients. Instead, they’ll start pocketing some of the higher payouts for themselves, improving their profitability.

That makes this an opportune time to invest in asset-management stocks. Focus on companies that will benefit almost immediately from a rate increase, such as Northern Trust Corp. (symbol NTRS, $68.48). It is one of the largest private and custodial banks for affluent investors and large institutions. In 2014, it forwent nearly $130 million in fees, but execs say most of the waivers can be eliminated once the federal funds rate, the Fed’s benchmark rate, climbs to 0.75%. Meanwhile, Northern Trust has focused on doing more with less. Its return on equity (a measure of profitability) improved from 8.6% in 2011 to 12.1% in the first half of 2015. Despite lofty profit expectations, the stock has declined 13% since early August. Analysts expect earnings to jump 18%, to $3.88 per share, this year, and 13% in 2016, to $4.38 per share. (All share prices are as of October 9.)

If you don’t want to rely on the Fed, look for companies that can drum up business regardless of rate moves. New rules from the Department of Labor, likely to pass next year, will require brokers working with most retirement plans, including 401(k)s and individual retirement accounts, to act in the best interest of their clients. That, in turn, could lead advisers to shift money from high-cost investment products to low-fee index funds. “The way the DOL rule is written gives an advantage to providers of passive investments, such as exchange-traded funds,” says Michael Wong, an analyst at Morningstar.

One such company is State Street Corp. (STT, $68.76). Like Northern Trust, State Street manages a private bank for wealthy investors and institutions. But it also sponsors the widely popular SPDR ETFs, which made up 18% of State Street’s assets under management as of the end of the second quarter—a figure that is likely to grow if the DOL rule passes. Money market fee waivers have also come down, from $12.7 million at the end of 2014 to $10.1 in the second quarter of this year. The stock has fallen 15% since its July peak. Analysts expect almost no profit growth this year, but they forecast a 9% increase in earnings, to $5.52 per share, in 2016.

The focus on low-cost investing is also likely to help asset manager BlackRock (BLK, $318.11), which sponsors iShares, the leading provider of ETFs, and discount broker Charles Schwab Corp. (SCHW, $28.22), which offers its own lineup of ETFs. The iShares brand holds $1.04 trillion in assets, accounting for 37% of the global market for exchange-traded products. Year to date through August, iShares attracted $57.4 billion more in assets than it lost, the most of any company. All of the fees those ETFs generate are helping to boost BlackRock’s profits. Analysts expect earnings to rise just 1% in 2015, then expand by 10% in 2016, to $21.30 per share. BlackRock’s stock has dropped 15% from its record high of $382.84, reached last February. .

Schwab, meanwhile, has jumped on the robo-adviser bandwagon, providing automated investment portfolio management. The service is free except for the cost of the funds that are included in recommended portfolios (most of which happen to be Schwab ETFs). Those ETF revenues could help offset the massive fee waivers that Schwab has had to swallow on money market funds—$353 million in the first half of 2015 alone. As such, a Fed rate hike would quickly add to the bottom line. Analysts expect profits to rise 7% this year, to $1.00 per share, then jump a whopping 39% in 2016, to $1.39 per share. The stock has sunk 21% since August.