What’s Next for a Turbulent Market

Investors wonder if it’s sink or swim for stocks. Our take: time to bottom-fish. 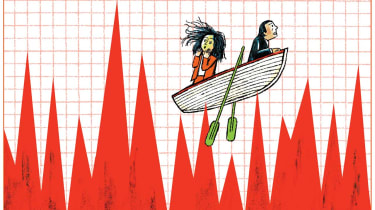 Investors tossed about by the stock market’s rough seas are no doubt wondering what just hit them. A bear market? A bull-market correction? We won’t know for sure until sometime in the future. But when it comes to your investing strategy, the answer matters less than you think.

Stock prices peaked last September and have been in a volatility vortex ever since. From the September peak to the trough on December 24, Standard & Poor’s 500-stock index fell 19.8%—escaping by a whisker the generally accepted definition of a bear market, which is a loss of 20% or more. Other market benchmarks were clearly mauled by the bear, including the small-company Russell 2000, which fell 27%, and the Dow Jones transportation average, down 25%. Losses were greatest in the energy sector, down 31%, and communication services (which includes Alphabet, Facebook and Netflix), down 29%.

Dramatic downdrafts are often followed by big bounces, and at its recent close of 2596, the S&P 500 is already up 10% from its low. But the volatile swings aren’t over. “I’m confident that we will not go below [a loss of] 19.8% on the S&P 500, but we have to engage in some backing and filling to prove that was the low,” says Sam Stovall, chief investment strategist at research firm CFRA.

Think of the past 12 months as a rolling bear market, says Russ Koesterich, portfolio manager for the global allocation team at investment giant BlackRock. In other words, investors have punished various market segments in succession, starting with emerging markets early in 2018. Stovall calls the late 2018 collapse “the deepest of corrections.” But Jim Paulsen, chief strategist at Leuthold Group, sums up the downturn this way: “What you call it is way less important than what you do with it.”

A buying opportunity? Sharply lower share prices in relation to earnings and other yardsticks may have given an aged bull a little breathing room (see Thanks for the Memories: Bull Market Hits 10-Year Mark). “We may have reset the dial for as much as another year,” says Stovall. In January 2018, the S&P 500 was trading at 19 times projected earnings for the companies in the index. It fell to 14 times earnings in December and recently traded at 15 times analysts’ estimates for the year ahead. “That’s a revaluation miracle,” says Paulsen.

Slowing economic growth that allows the Federal Reserve to pause its rate-hiking campaign is also a plus. As long as the economy doesn’t sink into recession, Paulsen sees the market testing its old highs (around 2900 for the S&P 500).

For now, Koesterich advises investors to use a two-pronged strategy: Keep more cash while also bottom-fishing for bargains in financials, energy firms, materials producers and industrials. Look for companies with strong balance sheets and a history of increasing earnings and dividends, such as aerospace and defense firm Northrop Grumman (symbol NOC, $256) or Bank of New York Mellon (BK, $48), says Stovall. “I’d have more overseas than in the U.S.,” says Paulsen. “International stocks are better values, and they’re coming out of a slowdown already.”

Whatever you do, make sure you’re investing in sync with your stage in life and your risk tolerance so you’re prepared for a real bear market—the one that will precede the next recession and could arrive later in 2019 or early next year. Because when that bear arrives, there might be nothing ambiguous about it.