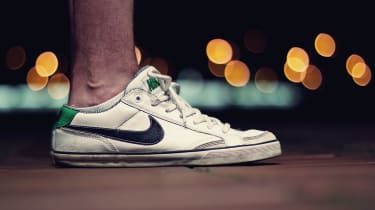 Nike (NKE, $53.19) has churned out a disappointing 2017 so far. Its shares have gained just 2.3%, a fraction of the 10.7% return delivered by Standard & Poor’s 500-stock index. Worse still for buy-and-holders has been the roller-coaster nature of this year’s ride, with the stock trading in a wide range of 16% from trough to peak. (Prices and returns as of Sept. 21.)

Mylanta, then, might be in order for Nike’s upcoming earnings report for its fiscal first quarter ended Aug. 31, slated to be released after Tuesday’s closing bell.

Nike’s last quarterly earnings report, delivered in late June, was a clear success, with fiscal Q4 revenues and profits both coming in ahead of consensus estimates. That – combined with a confirmation that the athletic apparel specialist would be directly selling some of its wares on Amazon.com (AMZN) – sparked a monthlong rally that pushed Nike shares to highs for the year.

However, Nike enters this week’s earnings report not in stride, but picking up the pieces after a disastrous month and a half. Dreadful mid-August reports from sports retailers Dicks Sporting Goods (DKS) and Foot Locker (FL) jarred shares of Nike and rival Under Armour (UA, UAA), which analysts fear are ceding ground to German athletic gear giant Adidas (ADDYY). Jefferies analyst Randal Konik downgraded Nike shortly thereafter, saying, “our mosaic of five data sources suggests growth and margins are at risk ahead.”

Analysts’ estimates for the to-be-reported August quarter don’t offer much hope of a near-term change in fates.

Nike is expected to earn just 48 cents per share in fiscal Q1 – a 34% decline year-over-year. Analysts believe that will come from a meager 0.3% year-over-year uptick in revenues to $9.1 billion, which looks particularly weak given the full year’s expected top-line growth of 4.8%.

There are a few bulls. For instance, Bernstein analyst Jamie Merriman said on Sept. 12 that Nike still is “best in class” amid initiating the stock at “Outperform” (buy, essentially) with a $69 price target that implied 30% upside at the time. Even then, he sees the potential for Nike’s “Edit to Amplify” product-thinning initiative to continue to weigh on sales for all of fiscal 2018, which ends next May.

But shorter term, investors in Nike should be wary of a Sept. 19 downgrade to “Neutral” from “Positive” by Susquehanna analyst Sam Poser, who specifically warned about slowing basketball product performance, as well as a general problem with oversupply.

While Poser expressed optimism that Nike would fix the oversupply issue, he warned that it “is not something that will be corrected overnight.”

That issue could creep not only into Tuesday’s earnings report, but further into the fiscal year.

Earnings Spotlight: Micron Technology (MU) – From a headline perspective, Micron’s earnings report for its fiscal fourth quarter ended Sept. 1 should be a doozy. Due out after Tuesday’s closing bell, Wall Street analysts see the top line expanding by 85% year-over-year to $6 billion – a standout quarter amid a full year that should end up seeing 63% revenue growth. Meanwhile, the analyst consensus sees the bottom line flipping from a 5-cent-per-share loss in the year-ago Q4 to a profit of $1.84 per share. While that’s a high bar to clear, the fact that Wall Street has been warming up to the chipmaker – six analysts have revised their earnings estimates higher in the past month alone – should encourage MU bulls.

Earnings Spotlight: Rite Aid (RAD) – Pharmacy chain Rite Aid was tripped up again recently following the Federal Trade Commission’s approval of a “skinny” deal with Walgreens Boots Alliance (WBA) involving the sale of fewer Rite Aid stores (1,932) than an earlier bid, and at a lower price (roughly $4.4 billion). It’s not all bad, however, as the remaining stores are expected to be profitable, and the deal proceeds should cut significantly into the company’s $7.2 billion in long-term debt. Shares are off 71% year-to-date, but might perk up should Rite Aid clear a very low bar Thursday morning when it reports results for its fiscal second quarter ended in late August. Analysts on average expect a 2.5% year-over-year decline in revenues to $7.8 billion, which should filter down to a breakeven bottom line.