Best Bank Stocks to Own as the Fed Hikes Interest Rates

After a sharp rally following the November presidential election, are there any bank stocks with more upside to give on rising rates? 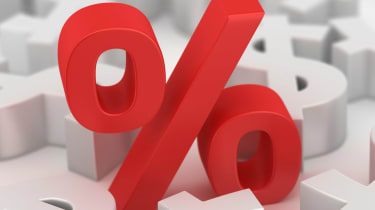 It looks all but certain that the Federal Reserve will raise short-term interest rates when it concludes its two-day meeting on March 15. Bank stocks are traditional beneficiaries of higher interest rates, but they have already rallied sharply since the presidential election in November because investors are giddy about potential corporate tax cuts and financial deregulation. If the central bank does indeed hike short-term rates at its next meeting, are there any bank stocks with more upside to come?

Plenty, says analyst Richard X. Bove of Rafferty Capital Markets. Due to safeguards put in place during the Great Recession, banks are sitting on big piles of cash that are earning very low returns. "In the last 10 years, the government has forced them to raise their cash and securities, so if you get an increase in rates they see a jump in interest income," Bove says. "And there's no cost against that. It's a simple increase in revenue.”

Kiplinger is forecasting three quarter-point rate hikes in 2017. If that holds true, the Fed's target on the federal-funds rate, the rate banks charge each other for overnight loans and a key influencer of other interest rates, would rise to a range of 1.25% to 1.5% by the end of the year. As rates rise, banks, which have heaps of assets already on the books, will prosper without management having to lift a finger. Here are three bank stocks that are especially well positioned to benefit from Fed rate hikes. (Prices and data as of March 10.)

All of the big national banks should get a lift from rising interest rates, but Bank of America stands out. By the bank's own estimates, a one-percentage-point rise in short- and long-term rates would increase its net interest income -- the difference between how much it earns in interest on loans and how much interest it pays on deposits -- by $3.4 billion a year. That's real money even for a bank the size of Bank of America. It has a market value (share price multiplied by number of shares outstanding) of $254 billion and reported net interest income of $10.3 billion in the fourth quarter.

Analysts also like the tailwind Bank of America is getting from expense reductions. "We believe that BAC shareholders will continue to benefit from owning BAC as the Fed increases rates and BAC management executes on the company's cost saving program," says Brian Kleinhanzl of Keefe Bruyette & Woods.

Kleinhanzl has a rating of "outperform" (buy, essentially) on the stock based on the expectation of two additional Fed rate hikes per year in 2017 and 2018. The stock has a dividend yield of 1.1% based on the last four quarters of earnings, which helps sweeten potential returns.

After Bank of America, Bove says JPMorgan Chase is best positioned to take advantage of higher interest rates. "They have something like $600 billion in assets that would see an increased return when interest rates go up," the analyst says. And even in the unlikely event that there are no rate increases this year, JPMorgan still expects the Fed's quarter-point hike from December to boost net interest income by approximately $3 billion in 2017. Net interest income totaled about $46 billion last year.

Credit Suisse analyst Susan Roth Katzke has an "outperform" rating on the stock, thanks to above average and improving return on equity, driven in part by higher rates. Return on equity is a key measure of a bank's profitability that shows how much income it generates on each dollar of shareholder equity.

UBS Global Research rates JPMorgan shares at “buy,” noting that the bank is "well positioned to benefit from higher interest rates, moderately faster economic growth, and, possibly, better capital markets.” The nation's largest bank by assets has a market value of $326 billion and offers investors a dividend yield of 2.1%.

Northern Trust is something of a "quasi" bank, Bove says. As a financial holding company, it offers services such as wealth management, private banking and custodial and administrative services for institutions. Nevertheless, it's positioned for much higher returns as rates go up.

The duration of the company's bond portfolio is a bit longer than a year, Bove notes. That’s a short period of time in the world of fixed income and suggests a one percentage point rise in interest rates would only lower the value of its bond portfolio by 1% or so. As rates rise, Northern Trust can quickly replace mature debt with newer bonds carrying higher interest payments. Bove notes that as of Dec. 31, the company had $942 billion in assets under management and $8.5 trillion in assets under custody and administration.

In addition to higher interest income, Northern Trust gets a lift from a rising stock market. "If the equity markets go up, they see a big jump in revenues because they charge based on assets under management or custody and there's no cost against it," Bove says. When stronger economic growth is in the forecast, as it is today, interest rates and stock prices can rise at the same time. The bank has a market value of $20 billion and a dividend yield of 1.7%.