How One Investor's Socially Responsible Portfolio Has Fared

We check up on a socially conscious investor we interviewed more than ten years ago. 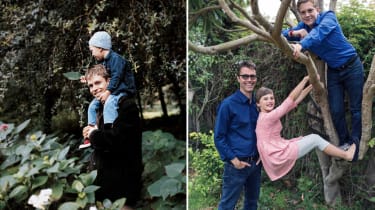 When we spoke to Deke Sharon in March 2004, the young musician was determined to invest his family’s savings with an eye to the social good. He and his wife, Katy, with the help of an adviser, had transformed a portfolio stuffed with tobacco stocks into one invested in mutual funds with holdings screened to meet social agendas and ethical standards that the Sharons could live with. “Even if we earn a little less,” Deke said at the time, “at least our money is going to make the world a better place.”

Sharon’s musical career has flourished since we pictured him with son Cap astride his shoulders. Now 47, Sharon produces The Sing-Off, an American Idol-esque TV competition for a cappella groups, which has aired in the U.S., China, the Netherlands and, most recently, South Africa. Sharon also served as arranger, on-site music director and vocal producer for the movies Pitch Perfect and Pitch Perfect 2. He’s currently working on a series for Lifetime, tentatively called Sing It!, in which he’ll appear on camera coaching a high school a cappella group in Cherry Hill, N.J., as they face off against their crosstown rivals. Cap, who is now 15, is following in his dad’s musical footsteps, and daughter Mimi, 11, attends a school for the performing arts.

The Sharons’ portfolio has more than tripled in value since 2004, reflecting continued saving and modest returns. One of the top-performing holdings is Pax World Small Cap fund [PXSCX], which has beaten similar funds in five of the six full years it’s been in operation. By contrast, Citi National Rochdale Socially Responsible Equity [AHRAX] has lagged the market and its peers in seven of the nine years through 2014. (Our favorite socially screened fund: Parnassus Mid Cap [PARMX], a member of the Kiplinger 25.) Overall, the Sharons’ portfolio, roughly 70% in stocks and 30% in bonds, has delivered annualized returns in the low single digits, after fees—certainly not stellar, but also tempered by the family’s moderate-risk profile and the outsized impact of the 2007–09 bear market.

Sharon is confident that his returns will improve over the long haul. “When you put money in the stock market, you take risks,” he says. “My intention is to stay the course. No doubt our portfolio hasn’t fared as well as it would have if we’d invested in weapons and such over the past decade. But I sleep well at night knowing that my money isn’t working counter to my life’s goal, which is to spread harmony through harmony.”

Is the market open today? Take a look at which holidays the stock markets and bond markets take off in 2020.
Saver's Credit: A Retirement Tax Break for the Middle Class

Your retirement contributions could be the key to a lower tax bill.
65 Best Dividend Stocks You Can Count On

Unless the benchmark is relevant to your personal plan, it could steer you into taking a wrong turn.
Skip to ContentSkip to Footer