Bonds: Time to Pull Back

With corporate and municipal bond yields down and interest rates likely to rise, the best buying opportunities are abroad.

Bond investors are sitting pretty as we ring in 2010. They’ve erased all of their 2008 losses, thanks to a dramatic rebound in prices following the collapse of most types of bonds during the financial crisis. The bad news is that with prices for corporate and municipal bonds up (and yields, which move inversely with prices, down), the opportunity for further gains is limited. So, expect to earn what a bond or bond fund currently yields over the coming year and little more.

Treasuries, which were stars during the financial crisis, performed poorly during the past year as their yields rose from the panic-induced record lows of late ‘08. The yield on the ten-year Treasury, 3.5% in early November, should pass 4% in 2010, suggesting further price declines for government bonds (the longer-term outlook is also negative). As for short-term yields, Kiplinger’s expects the Federal Reserve Board to start raising the federal funds rate this summer, a move that savers will welcome because money-market-fund and other short-term yields key off the Fed’s benchmark rate.

In the meantime, you should start trimming bond holdings that have grown into unusually large positions because of the 2009 recovery. Snip first at holdings that rallied the most -- probably any high-yield fund you own (see the table below for how different bond classes performed in 2008 and 2009). Matt Freund, manager of USAA High-Yield Opportunities, says that the past year’s recovery in junk bonds made sense because “default expectations were cut almost in half” as credit markets thawed and even weak companies were able to borrow once again. But from here on, the performance of junk bonds depends on the course of the economy. “We need to see more evidence that the recovery is stable” before putting new money into junk bonds, says Kathleen Gaffney, co-manager of Loomis Sayles Bond (symbol LSBRX), a member of the Kiplinger 25.

Investors in all kinds of high-quality debt -- government, corporate and municipal -- are faced with a conundrum: These securities tend to be more sensitive to interest-rate movements than are low-quality, high-coupon bonds. Some experts think that with the economy still sluggish, it’s too early to begin positioning for an interest-rate rise -- a stance that argues for buying long-maturity bonds, which offer higher yields than short-term issues. But, as Tom Atteberry, manager of FPA New Income fund, notes, “How will you know when it’s the right time to exit? When everyone else is trying to sell at the same time as you?”

If you haven’t already diversified into bonds denominated in foreign currencies, do it now. But check first to see whether your core bond fund already holds some foreign bonds. For example, Loomis Sayles Bond has 13% of its assets in bonds denominated in Canadian dollars -- a play on the country’s energy and commodity resources -- and another 15% in other foreign debt. For additional exposure, check out T. Rowe Price International Bond (RPIBX), which holds developed-market government IOUs. 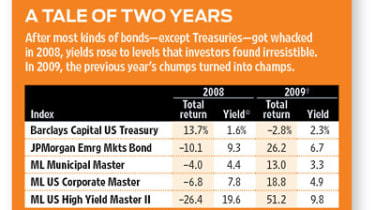