Is China a Scapegoat or Real Market Threat?

We have become so focused on China that news from across the Pacific has an immediate impact on our capital markets, but a number of global challenges are also at play. 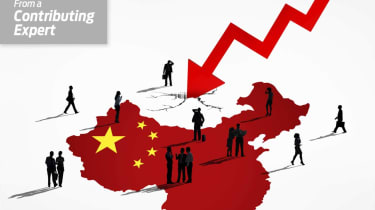 January 2016 saw the worst start of the year for Standard & Poor's 500-stock index in history beginning with a collapse in the Chinese equity market, and the continued decline can be attributed to sustained market volatility and the decline in oil prices. These events provide an opportunity to examine several questions important to investors and revisit some fundamental principles of investing in capital markets.

First, it's important to remember how well-functioning capital markets work and what prices reflect; prices reflect the aggregate expectations of market participants. Risk aversion, investors' tastes and preferences, and expectations about future profits are among the many inputs that affect aggregate expectations. We should expect these inputs to vary day-to-day. Markets adapt to changing expectations and new information, and as a result, we should expect prices, as well as the level of volatility, to fluctuate. If markets never adjusted and always remained constant, the market would not be functioning properly.

The news from China as we entered 2016 spooked the market.

The re-emergence of China as a major force in the global economy has been one of the most significant drivers of markets in the past 15 years. China's rapid industrialization, as the population urbanized, drove strong demand for commodities and other materials. Now China is entering a new phase of modernization, and the government and regulators are seeking to rebalance growth and bring to maturity the country's still relatively undeveloped capital markets.

The reasons for China's stock market troubles are many, but most analysts point to a move by the central bank to weaken China's currency, the renminbi (also referred to as its biggest denomination, the yuan), as the primary cause for the decline.

In January, China's central bank lowered the renminbi's so-called reference rate, its trading peg to the U.S. dollar, by the largest margin since August, which created fear that China's leaders are using a weaker currency to spark growth for an economy that is struggling more than expected. Over the years, China has allowed its currency to appreciate in efforts to rebalance its economy away from relying on investment and exports to one reliant more on domestic consumption. However, the sharp slowdown in the Chinese economy this year, paired with big losses in its equity markets, has derailed things. Currency devaluation is a means of subsidizing its manufacturing and export industry to boost growth, something that they were trying to steer away from. The message that currency devaluation sends is one of a troubled domestic Chinese economy.

At that time, when China was leading the headlines, I was frequently asked if the environment in China really warrants a global sell-off. My answer for the short-term, up to one year, was "yes" because the market's mood and daily direction is headline-driven and our instant access to information moves markets. My longer-term answer was "no," even though the Chinese economy is now the largest in the world (measured in terms of purchasing power parity, which takes into account the relative cost of local goods), ranking ahead of the U.S., India, Japan, Germany and Russia. Some of the reasons that happenings in China shouldn't determine the longer-term value of our market or most others are listed below.

China is classified by some index providers as an emerging market, which are markets that fall short of the definition of developed markets on a number of measures, such as economic development, size, liquidity, transparency and property rights. (Others consider it a developed international market.) China's stock market is still relatively young. The two major exchanges, Shanghai and the southern city of Shenzhen, were established in 1990. With foreign participation in mainland Chinese markets still heavily restricted, many foreign investors have sought exposure to China through Hong Kong or China shares listed on the New York Stock Exchange.

As a consequence, domestic investors account for about 90% of the activity on the Chinese mainland market, and the participation is quite narrow. According to a Chinese household finance survey, only about 8% of Chinese families held shares. By comparison, just over half of all Americans own stock, according to Gallup.

Another point of perspective is that while the Chinese economy has been slowing, it is still expanding at around 7% per year, which is more than twice the rate of most developed economies. China and the rest of the world were used to its growth rate being in the low double digits, so although 7% is still operating at a clip well above most other countries, it's a sign of a slowdown.

Even though China has become a dominant economic force with large expectations, its market share is still relatively small in global terms. It makes up just 2.6% of the MSCI All Country World index, which takes into account the proportion of a company's shares that are available to be traded by the public. To put this in context, Apple alone has a market share of 1.3%, which is half as big as China's total market share. Not surprisingly, the U.S. has the largest global market share at 52%.

To state the obvious, the U.S. economic and political landscape is extremely different from China's; therefore it should be viewed and measured differently. I understand the impact of headlines and rapidly available information on market sentiment, but China's market volatility should not be a global concern, especially when taking all of the aforementioned into consideration. It's important to understand that the stock market is not the economy and to remember that China's market is only about 2.6% of global market capitalization. What the Chinese market collapse did was spook global markets and expose other areas of economic uncertainty and concern, namely oil and quantitative easing. In fact, we are now in a period where the decline in oil prices has stolen headlines, and negative interest rates and deflation has crept into conversation.

The point is: There has always been and there will always be reasons to worry about the economy and market. Volatility is part of the market's DNA, and without it the equity markets would not have the risk premiums that they do. The market minus its volatility would offer returns similar to government bonds. The risk premium for equities is a form of compensation above and beyond the risk-free rate of return that investors expect to earn for tolerating extra risk. Periods of heightened concern and uncertainty are actually the most opportune times for savvy investors because they generate the largest returns (risk premiums) for investors.

Investing during times when the media has you believing that things are different "this time," and not in a good way, are emotionally the most difficult. That's why it's important to keep emotions and media noise in check, and to buy the market during periods of weakness, if it makes sense for your objectives. It's important to remember that there is ample evidence that suggest prices adjust in such a way that every day there is a positive expected return on our invested capital. While the actual return over any period may be positive or negative, in expectation we believe markets will go up. As investors, we should remain disciplined through all periods in order to capture the expected returns that the market offers.

Capitalism is resilient and will continue to reward disciplined investors who exercise prudent asset class diversification and focus on keeping costs low and on the dimensions of the market that compensate investors for taking additional risks.

China created the market slide, but it's not the reason for its continued weakness.