I See a Major Stock Market Decline Ahead

Do not buy the hype that the market is fairly valued or undervalued. You can see for yourself in the charts below. 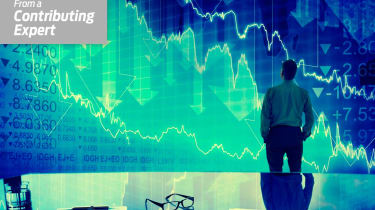 Investors seem to have a good handle on stock prices. This stock is $100/sh, that stock is $45/sh and so on. But do they know the value of those stocks?

There are a number of ways to value a stock or a market. Price/Earnings Ratio (PE) is most often used. It tells an investor how many dollars the company earns for each share of stock they own. Suppose a company has Earnings Per Share (EPS) of $2.00 and a stock that trades at $30. Its' PE would be 15. By itself, this tells you nothing, but comparing it to the earnings growth rate may reveal if the stock price is over or under valued.

Each stock has its own PE and EPS growth rate. They all move in cycles that may appear to be random to some. That is where markets come in. Studying the market's earnings and cycles can give an investor insights into whether the whole market is over or under valued.

Because value is cyclical, the PE10 goes up and then down. The PE10 has hit 4.78; 5.57 and 6.64 at previous value lows. PE10s under 10 would be considered very undervalued. What was the low in 2009, when the market hit a price low? 13.32 - Far from previous value lows. This is one of the main reasons we have felt that the ensuing market rally from 2009 through 2014 was artificial, based on outside influences and not based on market fundamentals or value.

Below is a simpler chart showing the rolling ten year average PE of the S&P 500. Here the cycle is much clearer, peaking in the high teens and bottoming around 9 or 10 times earnings. Until 1997.

In 1997, at about 18 PE, the chart appears to want to top out. But instead, it skyrockets higher. This is part of the so-called “Greenspan Miracle,” where former Fed Chairman Alan Greenspan discovered that pumping money into the system would pump up the market. As you can see, the red line (10 yr average PE) continued up to an all-time high of 31.46, almost double previous highs. Since then, the PE has come down, but is still well above previous highs.

So what does all of this mean to investors? In order for the composite "value" of the market to come down to its historical cyclical lows, either earnings are going to have to skyrocket or stock prices have a long way to fall. To bring stock prices down to previous historically high values, the market would have to drop another 20% or so. To come down to average valuation, the market would have to drop around 50% and to get to historically low values…. you don't want to know.

So here are the five numbers you should understand before you invest another dollar:

4) Peaks above 24 have always led to long term market declines.

How do you use this information?

Lastly, when I first started in the business, more than 30 years ago, an old-timer told me a hard truth about the markets - that bear markets hurt as many people as much as possible. That is why they have such big rallies, to sucker people back in, and then slam them.